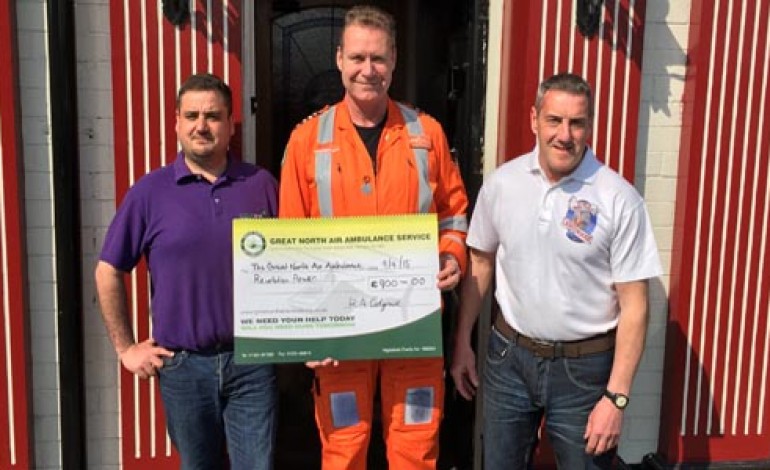 Wayne Richardson, owner of Revolution Power, was shocked to learn money collected for the North East Air Ambulance, was taken from the The Ship Inn, Middlestone, on Monday night.

More than £900 had been collected through a series of fundraisers, including fun days and contributions from the winners of the weekly quiz, and was stored in a gallon whiskey jar on the counter.

Wayne, whose Aycliffe-based company has been trading for nine years, said: “The whiskey bottle has been there for as long as I can remember and people are always putting money in it, as it’s for such a great cause.

“I couldn’t believe when I heard what had happened and wanted to help out anyway I could.

“As a local, family business, we are always keen to help out other businesses as a way of promoting the North East.”

The company supplies biomass boilers and recently won a significant £160,000 contract to build a 200 kilowatt biomass boiler for Riverdale Hall in Northumberland.

It also completed green projects on Bellingham’s town hall and various care homes across the North East, as well as installing solar panels into Northumberland’s RAF base.

Tony Langdale, who has owned the CAMRA award-winning pub for the last nine years, said: “It’s quite emotional that Revolution Power has chosen to help us out.

“It was really upsetting when I realised the bottle had been taken because we have always collected money since I came here, but never had any problems.

“Wayne has been coming to the pub for years and he is proof that there are good people out there.

“Thanks to Revolution Power, we will be able to get another bottle and continue raising money for charity.”

• Picture (above) supplied by Harvey & Hugo.