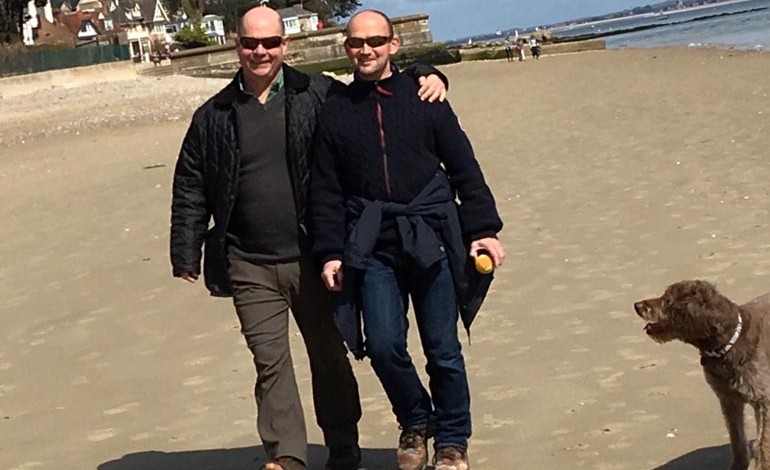 A Newton Aycliffe man who donated his stem cells through the Anthony Nolan register has formed a close friendship with the stranger whose life he saved.

Trevor Tinkler, 56, pictured above (left), donated stem cells in 2010 to Mike Felton, a 49-year-old fund manager from Harpenden in Hertfordshire.

Trevor, a specialist pipe-welder who has worked in Australia, Kosovo and Angola, had been on the register for almost a decade before being called upon.

“I got the shock of my life when I got the call,” said Trevor.

“It was the last thing I expected because I thought at 52 I’d be too old to donate, but I still wanted to do it – it was a privilege.”

The outpatient procedure involved four small injections to stimulate stem cell production, after which the cells were filtered from Trevor’s blood over approximately four hours.

“Because of the injections I felt a bit unwell for a week or two but it was fine. While I donated I just talked with my wife and son to pass the time. I felt weak afterwards but was back to normal within two weeks.”

At the time Trevor had no idea who he was donating to – let alone that he would form a close friendship with the recipient.

Anonymity rules mean that patients and donors cannot learn each others’ identities until two years after the transplant, if both are willing to be put in touch.

It was a straightforward procedure for Trevor but it had a big impact on his recipient. Mike was in desperate need of Trevor’s stem cells to cure his acute lymphoblastic leukaemia.

Mike had been having regular chemotherapy to manage his condition, but after the drugs started to damage his liver, a stem cell transplant became his best option.

Thankfully Trevor was a perfect match, and Mike responded well to the transplant, although he does still experience fatigue.

Mike said: “I didn’t know anything about my donor but I thought about them and who they were.

“Two years later we agreed we would like to be in touch. For some reason – probably anxiety – I didn’t get in touch with Trevor straight away.

“When I finally sat down and wrote him a long letter I found it very emotionally draining – it’s not every day you write to someone to say thank you very much for saving my life.”

The pair arranged to meet for Sunday lunch on Mothers’ Day 2012 at a pub in Bedfordshire, where Trevor and his family were holidaying.

Mike brought his wife Alison and two daughters, and Trevor was with his wife Lauren and eldest son Ben.

“When I saw him we gave each other a big hug,” said Mike.

“We probably spent the next half hour crying. He was as emotional as I was, if not more so. We had Sunday lunch together and spent about four hours talking. It was fantastic.”

As well as being ‘genetic twins’, the pair are now close friends. They regularly exchange letters, emails and phone calls and have even holidayed together at Mike and Alison’s holiday home on the Isle of Wight.

When Trevor took part in the 2013 Great North Swim in Lake Windermere to raise money for Anthony Nolan, Mike and Alison went along to cheer him on.

The pair are now urging more people, particularly young men who make up just 15% of potential donors, to join the Anthony Nolan register and give someone a second chance at life.

“Coming across people like Trevor massively restores your faith in humanity,” said Mike.

“He and his family are generous, charitable, lovely people. People are generous enough to sign up to things like the stem cell donor register and I imagine most people never hear back and never are a match, but if there is someone who needs a donation you could save that person’s life.

“If Anthony Nolan hadn’t been able to find a matching donor I don’t know where we would have gone to find someone to help save my life.”

Trevor added: “I’m useless at DIY so if Mike’s got a bit of me in him then he shouldn’t expect too much!

“Giving someone the gift of life is the best gift you could ever give. Whatever you have to go through to donate, it’s nothing compared to what the recipient has gone through.”

To join the Anthony Nolan register you must be aged 16-30 and in good health. Donors remain on the register until they are 60. Visit www.anthonynolan.org to find out more.