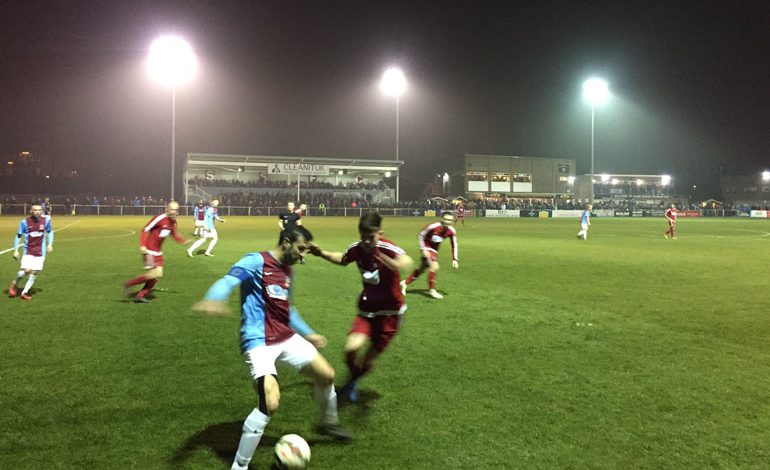 Despite going down to a 4-0 defeat to South Shields last week, Aycliffe could still hold their heads high after giving a plucky performance against a high-calibre side in front of a crowd of 1,237.

The kick-off was delayed for 30 minutes as a result of a floodlight failure. This seemed to affect Aycliffe the greater, as they got caught cold after only three minutes.

A soft free-kick was awarded on the right. A quality ball was put into the danger area by Richardson and under pressure, Dan Mitton headed the ball into his own net.

A minute later, captain Jamie Owens escaped his marker, but put his shot over the bar.

Aycliffe’s hopes suffered another blow on 10 minutes when Corey Nicholson suffered a bad ankle injury and had to be stretchered off. The game was held up for five minutes, and Jack Oliver came on in his place.

The Mariners continued to play their patient possession game, trying to stretch the Aycliffe defence.

They found a way through on 26 minutes when Baxter was played in and he put in a good cross for recent Mariners signing Blinco to run onto and finish past James Winter for 2-0.

Blinco had another chance on 32 minutes, but Winter made a good save.

The Mariners extended their two minutes later when Phillips crossed and centre half Petrache headed home.

Aycliffe worked tirelessly in the second half, as Shields were content to keep possession and probe for an opening.

Aycliffe’s task became even harder with 20 minutes to go when Scott Howes was sent off for a second caution.

The Mariners wrapped it up with a fourth goal in the 94th minute when a Richardson free kick evaded the wall and Winter.

Aycliffe’s game against Morpeth Town was called off on Saturday. A torrential downpour an hour before kick-off left large areas of standing water on the Moore Lane pitch.

The club’s small team of volunteers worked hard to clear the water but it was to no avail and the referee decided to call a halt just after 3pm.

The rearranged game is now due to be played on Tuesday April 25.

Aycliffe’s Moore Lane ground will be hosting three cup finals this month. The first of these is Friday April 7, when Darlington RA SSG take on Shildon Three Tuns in the Wear Valley Sunday League Division Three Cup final. Kick off is 6.30pm, with admission £2 adults and £1 concessions.