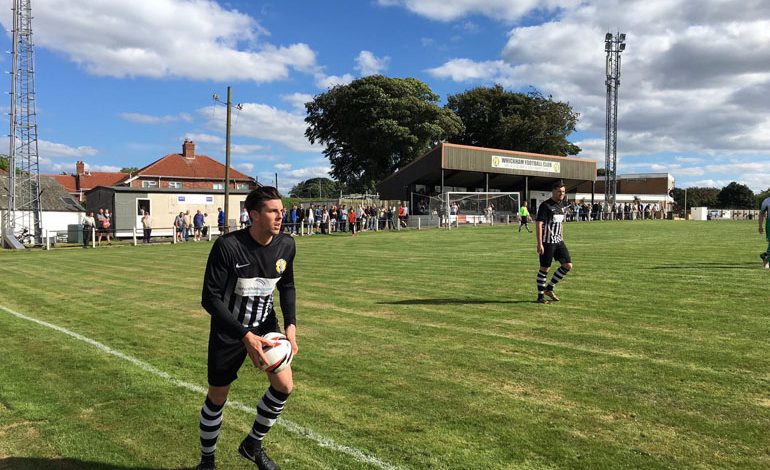 Newton Aycliffe crashed out of the FA Vase at the first hurdle, losing to second division side Whickham in the first qualifying round.

Aycliffe were unable to cope with the physical side of Whickham’s game, and although they received no help from the officials, they were well beaten at the end of a scrappy match.

James Winter made two good saves in the first ten minutes, as Whickham started the better of the two teams.

Aycliffe’s new signing Kieran Duffy-Weekes was unlucky on the quarter hour, when his lob over the Whickham keeper, who was out of his ground, narrowly missed the goal.

The home side went ahead on 23 minutes when a cross from their right was headed in by Collins.

Aycliffe were unlucky not to equalise two minutes later when a shot hit the bar, after good approach work.

Aycliffe then suffered the first of several injuries five minutes before half-time, with Kurt Matthews coming on to replace Stuart Banks.

On 56 minutes Whickham went 2-0 up when Aycliffe allowed a cross to be played in from the goal line. Keeper James Winter could only palm it out to the unmarked Broadhead to head in.

Aycliffe got back into the game on 72 minutes, when a Josh Gray free-kick was fired low and hard into the area, with a Whickham defender deflecting it into his own net.

However, Whickham quickly restored their two-goal advantage when Wharton fired an unstoppable shot into the top corner. To make matters worse, Matty Pennal was then sent off.

Gray shaved the post with three minutes to go as Aycliffe looked to get back.

Aycliffe’s next game is a league trip to Washington this Saturday (September 16, 3pm).