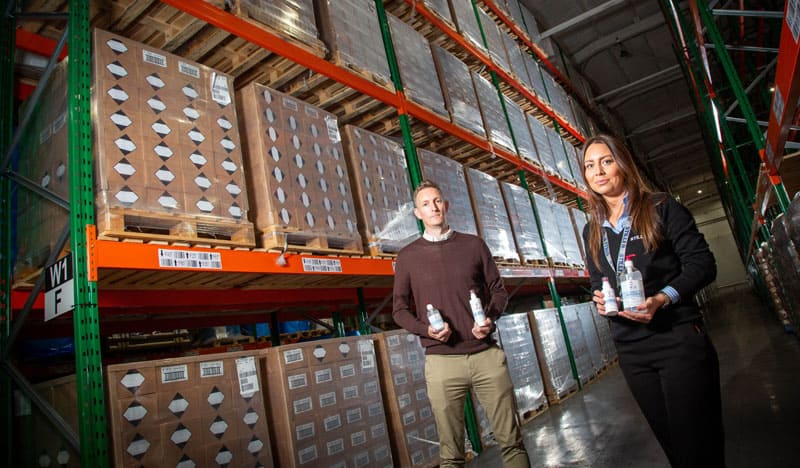 Logistics firm Stiller Warehousing and Distribution has secured a deal to store and distribute over half a million bottles of sanitiser gel per month which are being produced by nearby INEOS.

Its first sanitiser production facility in Newton Aycliffe was established in less than ten days and went on to produce millions of bottles of sanitisers free of charge to the NHS and thousands of hospitals, at the height of the coronavirus crisis.

Family-run logistics outfit Stiller has distributed around 500 pallets of 250ml hand sanitiser bottles – with each pallet containing between 1,000 and 2,000 bottles depending on size – since April, using Stiller’s extensive national networks.

That means at least 27,000 gallons of the gel have been circulated around the UK from Stiller’s Aycliffe HQ, contributing hugely to the national fight against Covid-19.

Stiller is able to handle the flammable products due to multi-million pound investments in its state-of-the-art warehousing facilities in recent years, and distribute them using the latest, specially-equipped vehicles.

Stiller has distributed the hand sanitisers locally to NHS hospitals and primary care centres locally through its deal with Hazchem, a standard pallet and parcel network which specialises in the movement of hazardous packaged goods, liquids or difficult-to-handle products.

And Stiller will also store up to 1,000 pallets of the 250ml bottles at its 22-acre logistics site in the heart of Aycliffe Business Park.

“Sanitiser has a high alcohol content making it flammable and therefore subject to specialist transportation requirements.

“Our highly-trained team, specially-equipped vehicles and affiliation with the Hazchem network make us well suited to distribute INEOS’ products to their clients.”

Stiller teamed up with Hazchem in 2019, which enabled them to transport hazardous products using its extensive network around the UK, Ireland and Europe.

Stiller has invested more than £11m in property, facilities and people in the last five years.

The company opened its new £2m freight distribution centre in 2019 and also converted its former logistics centre into a new 50,000 sq ft warehousing to accommodate 6,000 pallets. More than £6m has also been invested in maintaining its fleet of new vehicles.