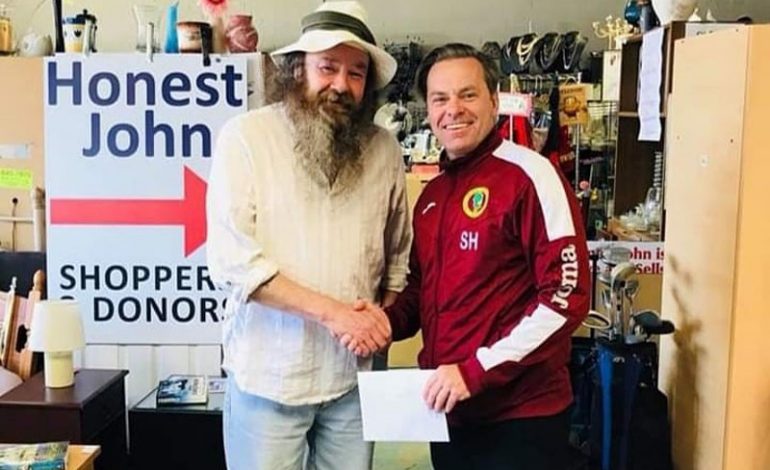 Newton Aycliffe Juniors FC would like to begin their round up this week by conveying their deepest sympathies to the family of “Honest” John Hilton, who sadly passed away last week.

John’s fantastic work made a massive positive impact on our community and has helped our club by the way of sponsorship and kind donations greatly over the years.

Our current Under 10 squad are wearing strips this season kindly sponsored by John. A remarkable man who will be sadly missed by many. Rest in peace John.

As the weekend beckoned for junior football the high winds made an unwelcome appearance! We did however see all but one of our scheduled league games go ahead.

Saturday saw the return of the Russell Foster League for the U7 Whites and U8 Blacks who had taken a short break in fixtures. Our U7 Whites faced neighbours Shildon in the Infinite Air Cup. This young team are showing massive improvements on the pitch week on week. Goals from William, Oscar, Harry and two from Regan left them in very high spirits. Man of the match went to Regan.

U8 Blacks were back in league action and despite high winds and the odd snow shower put in a very solid performance with two goals each from Charlie and Max. Man of the match was awarded to Mathis for an excellent performance and great passing.

U8 Juniors travelled to Boro Rangers Blues to continue their spring league TJFA campaign. Goals this week came from Joel, Jack and Mason.

U9s played host to Leven Juniors. The juniors only goal from the game came from Archie who also earned man of the match.

U10s were without a league game this week so took the opportunity to travel to Seaton Utd for a 9v9 friendly in preparation for next season. Goals came from Liam, Zeke, Jack, and two from Jack J. A great performance and challenge for the U10s, with man of match going to Jack J.

U11 Clarets were host to Whitby in the quarter final of the TJFA Challenge Cup. In what was a very close tightly contested game with goals from Kai and Ashton, the Clarets unfortunately saw their cup run come to an end. As always this team gave 100% and took the positives from their game. They were praised on their performance by their opponents, who also picked their man of the match, Lewis, for his strong defensive performance.

U11 Whites travelled to Eaglescliffe Elementis to continue their league campaign. The wind played havoc throughout the game but the juniors still managed to find the back of the net with two goals from Ethan and one from Jake after a fantastic solo run. Another fantastic result for our U11’s with man of the match going to Jack for a gritty and determined performance.

U11 Blacks welcomed Russell Foster’s Seaham in what proved to be a very tight game. Goals came from Jayden H, scoring two and Alex. The juniors showed great sportsmanship in some trying conditions throughout. Man of the match was awarded to Keaton.

U12 Whites faced Darlington TSC at home and after a solid performance came away with the 3 points and a 5-2 win. Tyler and Jayden both with two goals each and Niall also getting on the scoresheet. Man of the match was awarded to Jayden this week.

U12 Blacks made the journey to Middlesbrough to meet Riverside Juniors ‘Whites’. In very poor conditions and with a limited squad available it was not to be the juniors day. Well done to Noah for some great saves, which earned him man of the match.

U13’s were host to Blackwell Rangers. The juniors went behind by two goals early in the game but battled to level the score with two goals from Zak and went on to go 4-2 in front with goals from Alfie and Joe. They could not hold onto this lead with the score finishing in a 4-4 draw.

U15’s welcomed Riverside Juniors and came away with a well earned 5-4 win. The juniors were determined as a team, with goals from Lewis, Georgie, Gregg, Charlie and Leon. Man of the match went jointly to Jack and George C for a great central defensive performance.

We hope for some finer (maybe even warmer) weather next week! Thanks to all that help us, support us and encourage our young junior players whatever the weather. #juniorsmarchon