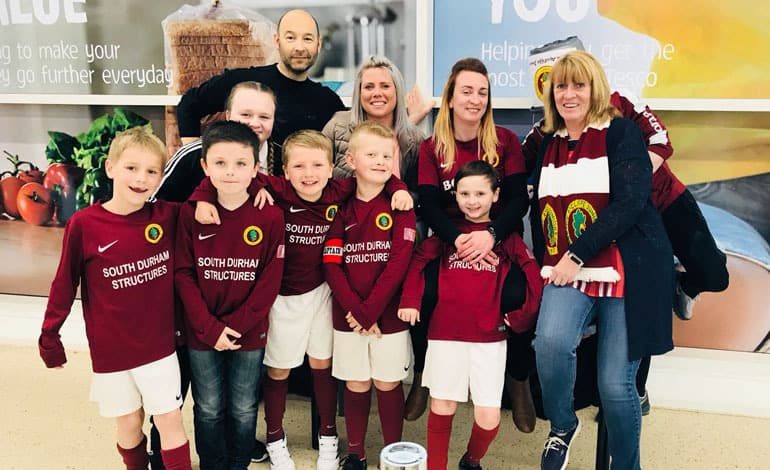 As Newton Aycliffe Juniors look ahead to their new season, the club would like to recognise those that have supported them and help make it possible for all of their teams to enjoy their football each week.

Every one of the teams have sponsors to thank for funding equipment and kits.

This year that support has also being enhanced by four teams bag-packing at the town’s Tesco store to raise additional funds.

Each team who have been welcomed into the store were well rewarded by the generous customers and all at NAJFC would like to thank both Tesco and their customers for the support.

The club have also welcomed new sponsors this year one of whom is well renowned for supporting local causes, Honest John. He has kindly provided new playing kits for the Under 9’s for next season as well as supporting the Under 23’s last season.

ROF 59 are now supporting the club and this year will be sponsoring both the Under 14’s and 17’s.

Other sponsors who have continued their support are Beanies flavour company, Yorkshire Bank, SE Landscaping, Steve Lambert Transport, Workshop Supplies, J Maitchell Builders and Offsite Design Services. The club would like to thank all of these companies for their ongoing support.

The Under 23’s presented awards for last season recently and this saw the Golden boot go to Matty Raisbeck. Player of the season was Jack Slatcher, manager’s award went to George Slatcher and the players’ player of the year was Declan McGough.