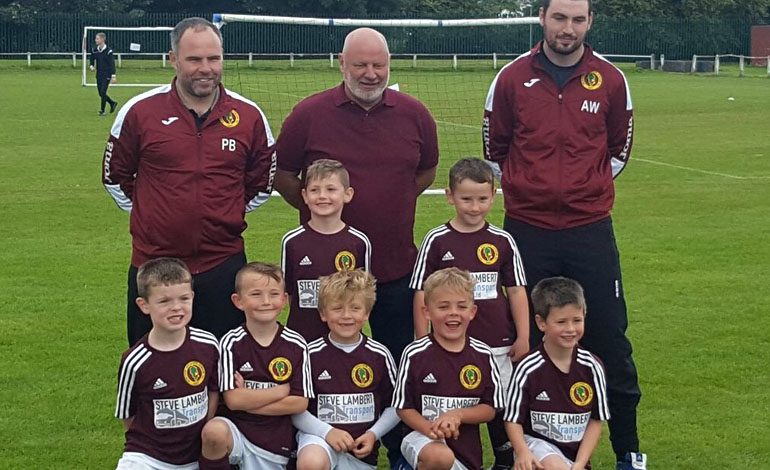 With each of the Durham FA, Russell Foster and TJFA leagues having now released their fixtures Newton Aycliffe Juniors Football teams are all set to get started with their new season.

Their oldest team, the Under 23’s, kick off first, with their league season starting on September 3 with a game against Todt Hill.

Other teams get underway a week later then our youngest team the Under 7’s wait until the 24th September for their first league game.

The Under 7’s (pictured above) are made up of players who have progressed through our development sessions for 4-6-year-olds. They can’t wait to get started and will be looking the part in their new kits kindly sponsored by Steve Lambert Transport.

The Under 8’s will be looking forward to continuing their efforts after sealing the league title last year.

The Under 9’s have gratefully received new kits sponsored by both Northern Gas Networks and Fiat Chrysler as they look to build on their success as they move in to 7 a side football.

The Under 10’s will be fielding two teams in the TJFA league this year and the ‘Whites’ will be enjoying life in Division 1 after sealing promotion last year.

The Under 11’s, having had a strong pre season, will be keen to get started in their new 9 a side format.

The Under 12’s will again field two teams one in the Russell Foster Saturday league and the other in Division 1 of the TJFA structure.

The Under 13’s and 16’s will again begin their campaigns led by the same manager, Adam Cayless. Both sides were in contention at the top of their leagues last year and we all hope this will continue.

Another key date to look out for is September 23, when Newton Aycliffe FC will be hosting a joint football community day with the Juniors at Moore Lane prior to their home game against Washington. This should be a great event so keep an eye out for more details coming soon.