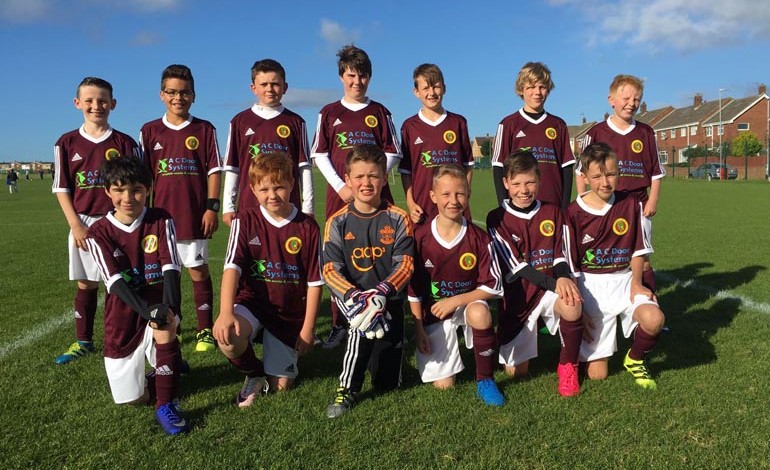 The Juniors marched on to another weekend of football action with lots of teams in both league and cup action.

The Under 7’s continued their bright start to the season with a 6-3 win at Sunnydale against Darlington Youth in the TJFA Challenge Cup. They opened up a 3 goal lead before Darlington pulled two back. However the lads stick at it and won the game with goals from an Alex hatrick, Oliver (2) and Thomas. A superb effort from all the squad which included Thomas, Dylan, Oliver, Alex, Josh, Lewis, Jamie and Layton.

The Under 9’s TJFA team won 2-1 against Darlington 21st All Stars again in the TJFA Challenge Cup. They started well and held All Stars back with great defence whilst creating chances when on attack. Aycliffe conceded first then Jayden equalised with a nice left foot shot after Harvey created space. In the second half Jayden’s second goal proved to be the winner in a great display from all the lads. The second game saw goals from James, Jayden then two a piece for Dom and Niall in a 6-3 win. The men of the match were Daniel and Connor.

The Under 9 Russell Foster League team showed great heart and passion in defeat against top of the table Leam Rangers. Jack Lowis was the man of the match on the day. Robbie, Sam, Henry and Noah were great in defence with McKenzie, Jake and Charlie going close to scoring and forcing several good saves from the Rangers goal keeper.

The Under 11 Russell Foster League team faced Shotton away and played well to earn a 3-1 win. It was goalless at half time then Jake showed some nice skill to play Noah in and after he was fouled by the keeper he got up and scored from the penalty spot, 1-0. Taylor’s shot was followed by Tom to add the second before Bo scored the third. Shotton managed a consolation goal but could not deny Aycliffe the win. Both the parents and players voted Sam as man of the match for an assured defensive display.

The Under 11 TJFA side were faced with the visit of Seaton Carew Tigers in the second round of the League Cup. The boys were in unstoppable form with Lucas getting the first goal before Jacob added a quick fire hatrick and Zack scored twice to make it 6-0 at half time. Lucas got his second, Zack finished off his hatrick then Jacob added his fourth to make it 9-0. The scoring was completed with a fine Charlie hatrick in a comprehensive 12-0 win.

The Under 12’s (pictured) were away at Greatham in the TJFA Challenge Cup they started well and Clark opened the scoring. Greatham equalised and then took advantage of some mistimed passing to go 3-1 up. In this exciting game goals from Hardy and Brown made it 3-3 at half time. In the second half Clark’s second goal made it 4-3 with Hardy’s second opening up a two goal lead. Greatham got one back and the game ended 5-4. Lewis Hardy who had a silky performance on the right side of midfield was the man of the match. The lads were all really pleased with their new kit kindly sponsored by AC Door Systems.

The Under 15’s were up against Yarm at home in the TJFA League Cup. Aycliffe felt they had the best of the first half but turned round 3-2 down. In the second half the effort got its reward as five unanswered goals came in a 7-3 win. Pick of the goals was a 35 yard screamer from Burrows who scored a hatrick, Hynes and Stoker added a brace each. A superb victory against a team from the league above.

Another great weekend for the Juniors with the players enjoying their games and getting some good results, if you are keen to get involved then get in touch on Facebook, Twitter or e-mail [email protected]