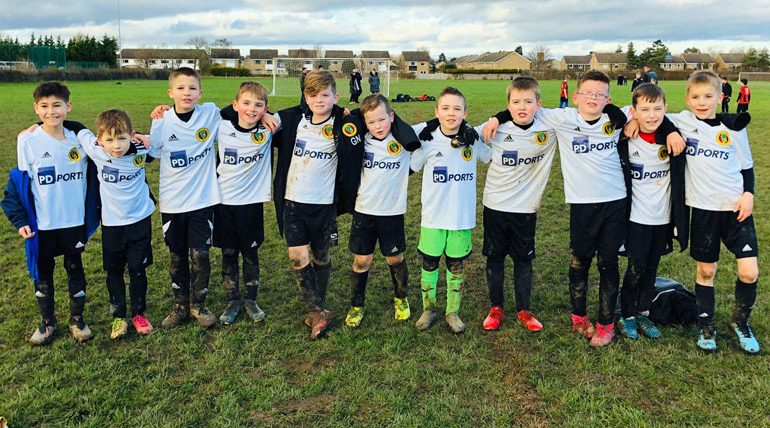 It has been a cold and windy weekend for the most part however for the teams that still had matches to play it was an early start and a chance to get another three points on the board for our Aycliffe Junior sides.

Our Under 8’s travelled to Washington to face Easington. The team sharply conceded and went 1-0 down however a quick chat at half time seemed to get the Juniors fired up as they shot out of the blocks in the second half with Jack scoring 2 almost immediately, this gave them momentum to carry on before Jonah and Dom also got in on the act also scoring 2 goals apiece. It was also a great goalkeeping performance from Jensen who made some excellent stops in the second half to keep the Aycliffe side going. The man of the match was awarded to Jack for scoring two incredible goals.

It was another trip to Durham for our Under 8 blacks. Despite playing into the wind in the first half the lads went ahead by following what they set out to do and keeping the ball on the floor. Second half the team dominated and as well as hitting the bar, both posts and some super saves from the opposition keeper they hit another 5 goals without reply. There was a hat-trick for Rhys, both Max and Charlie with 2 and one for Alfie. It was a great all-round performance with some excellent passing, Mathis won the man of the match from this one due to showing excellent work rate and determination for the team.

Our Under 9’s faced off against Stranton attempting to get back to winning ways. After all the team dug deep to get into the game, their effort was rewarded thanks to two superb goals from Alex who was awarded Man of the match.

The Under 10s travelled to play Leven in their first game of the new year. They had many players missing and with only 1 sub on the Aycliffe bench the team started to struggle with a slow start.Leven were up for the game and ended up going into the half time break in the lead. With a positional change at the start of the second half the Juniors pushed on and scored a great goal that unfortunately wasn’t given. However this didn’t phase the Aycliffe side as they continued to pressure, and their effort came into fruition with Jack grabbing an equaliser. The man of the match was awarded to Oscar.

The Under 11 Clarets played against Nunthorpe Athletic at the weekend. A scrappy first half saw Aycliffe get drawn into Nunthorpe’s style of play and they never really seemed to get going. This changed in the second half with Aycliffe dominating, creating lots of space and playing to their strengths of fast attacking football. Goals from Alex & Kai and a Man of the Match performance from Ashton saw them finish the game strong grabbing all 3 points in a currently unbeaten campaign for the team.

Our Under 13s reversed our fixture with Bedale juniors. In an excellent game to watch, Will and Thomas both grabbed two goals apiece with their opposition getting just the one. The result keeps them at the top of the league table in what has been an excellent and dominating campaign for this Aycliffe team.

The Under 14’s faced Whickham attempting to get another 3 points on the board. Goals from goalkeeper Josh, Kamil, Archie and Ashley helped to achieve this in a game where the team had to play quick football in testing conditions. The man of the match award was too close to call for the manager and was shared between Archie and Charlie.

U15’S lost away to Billingham 3-2 in a top 3 game. The lads went a few goals down however showed excellent courage and team spirit to almost pull it back they just couldn’t find the all important equaliser.Goals in this game came from Leon and Brandon and Ben was awarded the man of the match for some excellent effort.