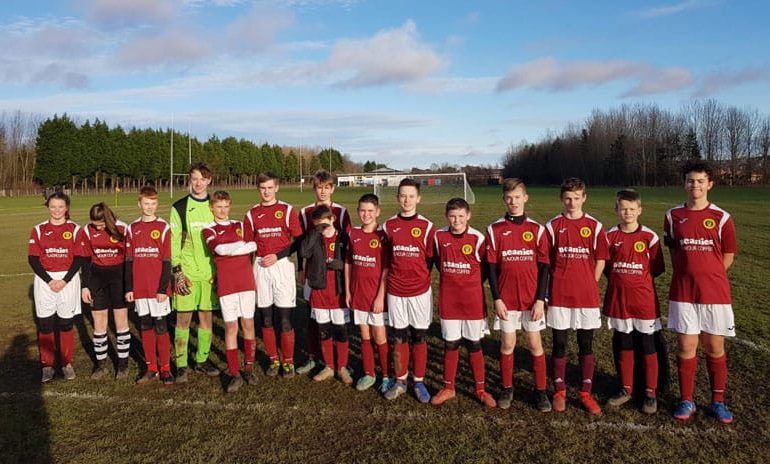 It’s a new year and that meant that for our Junior sides the football season resumes. After a refreshing break off, our teams were all looking for that all important 3 points.

Our Aycliffe Juniors u7s travelled to play Swalewall. Both teams had a great first half and it made for an entertaining game with the scores even at half time however it proved not to be the Aycliffe sides’ day as the three points went to the opposition. There were still positives to take from this game for an ever-improving side and the man of the match in this game was William W.

The Under 7 blacks played a friendly game to ease them back in after the festive period. Although the score didn’t go their way, all of the lads left the pitch with a smile on their face after they enjoyed getting back into matches and showing their ever-increasing abilities.

Up at Durham, our Under 8 Blacks team played in testing conditions in their first game back. In an eventful first half the score was level at half time however in the second half, Aycliffe stepped up a gear and scored four goals without reply. In this game Max scored a brace with Charlie, Rhys, Alfie and James all grabbing a single goal apiece. The man of the match award was given to James for constant determination and excellent composure to score when the chance arisen.

Our Under 8 Juniors were at home against Bishop St Mary’s Aces in the League Cup. After a slow start from the Aycliffe side there was an early goal scored however the team woke up and constantly battled throughout the match. Although the result didn’t go Aycliffe’s way, goals from Jack and goalkeeper Dom ensured the juniors didn’t make a bad account of themselves. In this game the Man of the match was Joel for his outstanding work rate.

The Under 8 whites faced off against Belmont . It was a brilliant game to watch and although there was only one goal in the game, it was an incredible attacking display from the Aycliffe side who played excellently in their first game back. Jack got the goal for the Juniors and the man of the match award was awarded to the whole team as they all played superbly and showed the mass improvement in their ability.

The Under 9s were against Leven. A game between these two sides is always close and there is always a high standard of football being played and this encounter proved no different. Alex grabbed a goal for the Aycliffe side who unfortunately didn’t get any points from this game. The man of the match for this fixture was Alfie.

Our Under 11 Whites returned to Woodham at the weekend to play against Prissick Rovers. The team started brightly playing some inspired football with some great passages of play. Aycliffe got themselves in the lead however the Aycliffe side started to run out of steam and injuries meant the team was starting to struggle. As the game got closer and closer to the conclusion the Juniors were unlucky and ended up not getting any points out of a game where they constantly battled and continued to show an incredible improvement. The man of the match was awarded to goalkeeper Danny for some great stops.

Our Under 11s blacks played top of league Ouston eagles away. The match started with Ouston getting an early goal, this did not phase the Aycliffe team who were full of character as they got their heads into the game to score 3 before half time, the opposition then came out fighting in the second half to get another goal, only for the Blacks to put 4 more past them. It was a truly outstanding performance all round, with an abundance of passing and an excellent display of teamwork, which was reflected in the result. Jayden H got himself a hattrick with Danny scoring a brace with Man of the match Alex S and Keaton also scoring one goal apiece.

Our Under 11 Clarets team made the journey to face Whinney Banks for a top of the table clash. Aycliffe fielded a depleted side again with only 9 players available, so it was always going to be a tough but entertaining game to watch. Whinney Banks lined up with an attacking formation but their early confidence soon dissipated when they realised how well Aycliffe can play, early goals saw Whinney Banks drop and start to play deeper. Every one of the Aycliffe players played well, linked together well and played arguably the best they have this season. Goals in this game came from Alex, Kai and Danny. The Man of the Match award was given to Alex who was unstoppable.

The Under 12s whites team faced Darlington TSC away from. It was a great all-round display from the Aycliffe team who appeared to be solid from defence to attack. Niall and Tyler both scored a goal apiece with eventual man of the match Jayden B grabbing a brace.

The Under 13s faced Darlington FC in the challenge cup. The Aycliffe side appeared to struggle from the off however to their credit they didn’t stop trying and although they are now out of the cup it means they can focus on their incredible league campaign with them eyeing up that top spot come the end of the season.

Our Under 14s travelled to play Whickham. After the Christmas break there is always the worry that teams will start slow and lethargic however this strong Aycliffe side showed ability and class with goals from Alex and Kamil helping them to all 3 points. The man of the match from this fixture was Josh.

The Under 15s faced higher league opposition in the shape of Blackwell Rangers in the cup. A goal from Leon wasn’t enough to help the Juniors to progress to the next round in the competition. The man of the match from this game was James.