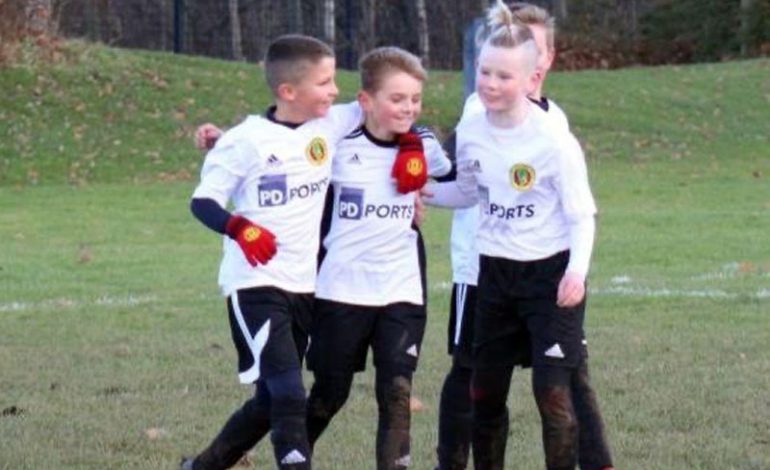 Although we are getting closer and closer to Christmas Day, the football remained a priority for our Junior sides that managed to get a match played in trying conditions.

Our Under 7’s played on Saturday morning in what was a frustrating game for the Aycliffe side. The lads’ confidence levels continue to grow and their ability on the ball is also improving and with a goal from the man of the match Regan they are translating their performances from their training sessions to their match on a weekend.

The Under 8 Juniors faced up against Bishop St Mary’s in a tough match. The Juniors didn’t start with their usual quick quality pace and this cost them early in the first half. In the second half, a goal from Marley and a much better team performance wasn’t enough to get Aycliffe the points. The Man of the match went to goalkeeper Joel for some great saves.

It was a great result for our Under 8 blacks today. With a few players missing due to illness and at least half the team not 100% it was good to see the team band together get a win. There were 3 goals from Man of the match Charlie, 2 from Max and 1 for Benjamin. The team are looking to build on this victory next week and get more results like this on the board.

The Under 9’s played Wynyard and despite going a goal down in the first half the lads were battling well and playing good football. Second half they came racing out the blocks and immediately equalised with a great finish from Alex. They then took the lead through some quick thinking and a great ball into Evan who didn’t hesitate to get himself a goal. Some more fine play seen them score another 2 goals with Alex getting his second of the game and Sam grabbing one aswell. The man of the match in this game was awarded to Archie.

The Under 10s were away to Primrose Hill. They started slowly on a very sticky pitch and only had 1 sub due to illness. They worked so hard and were lucky to come in at half time at 0-0, a tough team talk and a swap around in formation saw a much improved second half from the Aycliffe side. The juniors took control of the match and with Theo coming on later it gave them a fresh set of legs. After they kept battling a fantastic long pass from George who was solid all day found callum in the box who slotted the ball pass the keeper with just 4 minutes left. Aycliffe stayed firm and got the 3 points. The man of the match was awarded to George for an outstanding performance

Our Under 11 Clarets hosted Marton Royals at home. Both teams have had a strong start to the season and this meant it was always going to be a close affair. Aycliffe started stronger scoring 3 goals in the first half but a couple of mistakes allowed their opponents back in, so the score was all level at half time. Second half Marton came out strong but the Juniors were equally matched in all of their attacks. It was a brilliant performance throughout from Aycliffe, with Alex getting a hat trick thus earning the man of the match award.

The Under 11 whites made the early trip to Thirsk Falcons for a 9.30 kick off. The team was looking very bare after players had dropped out due to illness. Aycliffe didn’t let this bother them and played some of the best football they have done all season. Thirsk took the lead but a great strike from Jake brought us level and looking competitive. Thirsk grabbed another and it was 2-1 at half time. In the second half it was Aycliffe with their backs against the wall as 2 player advantage the opposition had really started to take their toll on the team. Aycliffe played great counter attacking football and Reiss brought them level at 2-2. Thirsk then went on to score 3 more cheap scrappy goals as the Juniors hit every part of the woodwork and had several attempts cleared off the line. Although the result wasn’t the ideal one, it was a great performance from the Aycliffe side and one that saw all 7 attending players receive the man of the match award.

Our Under 11 blacks played Birtley town away after weeks of waterlogged pitches and horrible weather had resulted in a string of games to be called off, the lads were quick of the mark in this game though going 3-1 up in the first half. They went on to grab another 3 goals for themselves in the second half. Keaton got himself two goals with Alex, Jayden W, Leon and Lewis all grabbing themselves a single goal. The man of the match was awarded to Leon after he scored an incredible goal from the half way line.

Our Under 12 Blacks were away to South Park rangers in what was a very close game between two good teams. The first half concluded with the score at 0-0 thanks to goalkeeper Lucas saving a penalty. In the second half the Juniors went in front through Kenzie but South Park got back in the game to make the final score 1-1. The man of the match award from this one went to Lucas

The Under 12 whites faced North Ormsby . Throughout the game the Aycliffe side asserted their dominance and showed great determination to keep their foot on the gas and this payed dividends as there was no shortage of goals for the Juniors in this match. Niall scored an amazing 4 goals with Tyler and Jayden both grabbing themselves a brace. Brad, Archie & Dom also got themselves on the scoresheet. The man of the match was awarded to Niall for a great attacking performance.

The Under 13’s played at home to Hartlepool Pools Youth Whites and came out as distinguished winners. It was a ruthless performance from the lads with Zak getting 4 goals, Dan H getting a hattrick, Will grabbing a brace and Charlie also netting. It was a great first half performance from a team who are definitely not struggling Infront of goal this season

The Under 14s faced Tynemouth United and after a bright start Aycliffe took the lead with a goal from Louis. However from here the team struggled to put a cohesive display together, eventually losing the game. Goals from Louis,Charlie and Bo couldn’t get Aycliffe any points on the day however the team are looking to bounce back next week. Bailey was awarded the man of the match award in this game.

Our Under 15’s played Thornaby at home in the cup. Aycliffe’s opposition are in the league above themselves however they showed no fear and after an incredible team performance and goals from Lewis and Leon, it was the Juniors that are advancing to the cups’ next round.