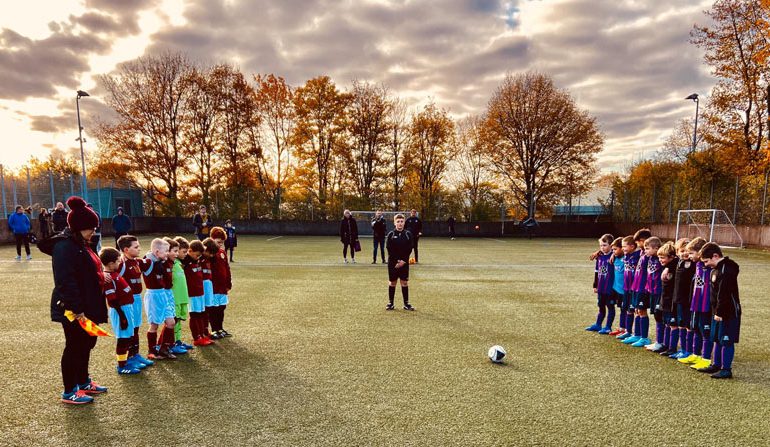 It was another busy weekend for our Junior teams. The club would like to say a massive thanks to all the players, managers, coaches and parents that took their time to pay their respect on this Remembrance Day weekend.

With lots of home and away teams taking part in a minutes silence and also wearing poppies and armbands. We are very proud of our young players for their respectful attitude. Lest we forget.

Under 7 Whites played against our local rivals Newton Aycliffe Youth however the result didn’t go their way. The boys didn’t start too well but finished the game with excellent fighting spirit, they are now starting to hold their positions better every week. Man of the match this week going to Oscar.

Under 7 Blacks had a very tough weekend with limited players however the boys put in massive effort and showed how they continue to work together as a team .Well done boys.

Under 8 Whites played a strong North East Tekkers side. It was a very cold morning however the juniors effort was fantastic and with only having 5 players they all came off at the end red faced and out of breath but the reward was worth it. 5 goals scored by leading goal scorer Jack and 1 excellent goal by Dan. Two man of the matches awarded this week, these went to Samuel and Jack.

Under 8 Blacks with yet another great performance however the result just didn’t go their way. There were some great all round performances, they are also starting to understand their positions and importance of covering each other. Max grabbed a hat trick and Benjamin was awarded man of the match.

Under 8 Juniors played a home game against a very strong Seaton Carew team. The juniors started strong from the start and the visitors kept fighting back however the boys stayed strong and in control for a good result. The whole team showed fantastic work rate and some brilliant football. Goals from Man of the Match of the match Alfie(2), Jack(2), Jonah(2).

Under 9’s played away against a good 21st Allstars team. Although it was a very close game unfortunately the result was not justified. Goal scorers were Tyler, Sam and Evan. Man of the match going to Archie.

Under 10’s were back in league action again away to Bishop Kings. A fantastic game and result against this strong Kings side. Well done to man of the match Thomas for a great hat trick. In the development game both sides played fantastic football again with a good goal from Joe and man of the match this time going to Ethan.

Under 11 Clarets played away against Hartlepool Pool Youths. After the minutes silence both teams got straight into action. It was a scrappy game but our boys were just were very strong against Hartlepool going forward. Goals from Ashton, Alex, and Kai. Man of the match this week going to Harrison.

Under 13’s hosted North Ormesby in a top of the table clash on a wet soggy pitch. It was a great team performance with the boys taking the lead through a goal from Zak. The team stayed strong with Zak completing his hat trick which resulted in Aycliffe coming out 3-2 winners, sending them to the top of table.

Under 15’s played away at Riverside Juniors. The team played some great football and ended the game as 5- 1 winners. Goals From Dylan (2), Leon (2) and Lewis. Man of the Match went to Jake H.