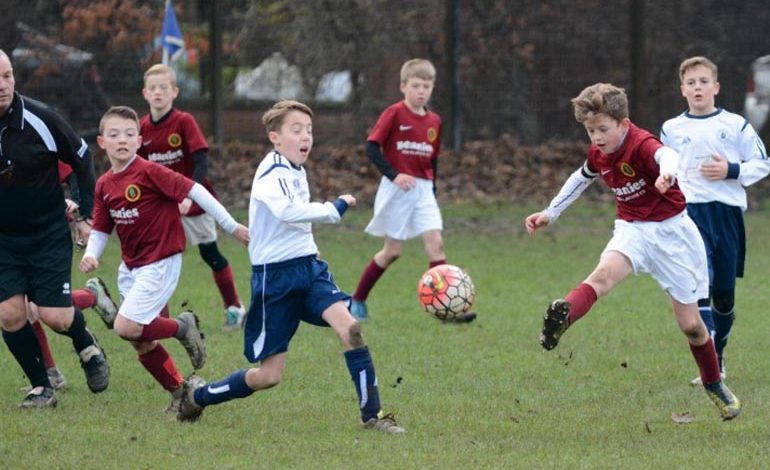 A variety of teams from Aycliffe Juniors played their last competitive fixtures of 2016 over the weekend and we witnessed some great performances and bizarre moments to end the calendar year.

The Under 9’s TJFA league team played against Billingham United and started brightly with Rhys hitting the post and Dom forcing a save. Rhys hit a free kick well but this hit the woodwork again and the score was 0-0 at half time. It was Rhys who hit two equalisers in the second half as Aycliffe went behind 1-0 then 2-1. His first from the penalty spot and the second a free kick, the game ending 2-2. An outstanding performance in the second game secured an 8-2 win and the mornings men of the match were Harvey and Niall.

The Under 11 TJFA league team had a top of the table clash at Marton. They didn’t start well and were 2-0 down after ten minutes. They battled back to 2-1 then 3-2. Jacob got both goals to make it an amazing 10 goals in the last 3 games for him. As the equaliser was sought a free kick was conceded against the run of play. A superb strike from this saw Marton score and win the game 4-2. Great effort from a team who have won 22 of the 27 league and cup games in 2016. All their games being played at the highest level of the league structure and have seen the team score 142 goals and concede only 33 throughout the year.

The Under 12’s game against Normanby Black got under way and the lads were looking good. However quite bizarrely after 15 minutes the game was abandoned doe to two horses taking up residence on the pitch!

The Under 15’s had a tough game against Darlington RA Locomotives and ended up on the wrong side of the 4-2 scoreline.

The Under 17’s played Billingham Synthonia at Sunnydale. After a slow start the chances started to come, Arron scored then Kieran headed in the second. This was only after Kieran made a bit of a mess of an earlier penalty! The second half was end to end with Ryan making some good saves, a goal being conceded then Sam scoring from the penalty spot in a 3-1 win.

After displacing Guisbirough from the top of the league with their win last week the Under 23’s travelled to face the new league leaders Peterlee Hereford. It was a funny affair, after going a goal down Slatcher equalised from the penalty spot. After a few questionable decisions the ref felt unable to continue with the game. They did eventually re start and despite a solid defensive effort Peterlee scored, although from an off side looking position, to win the game 2-1. Patrick Howe was chosen as the man of the match.

All at NAJFC would like to wish our players, parents, volunteers and supporters a Merry Christmas and all the best for 2017.