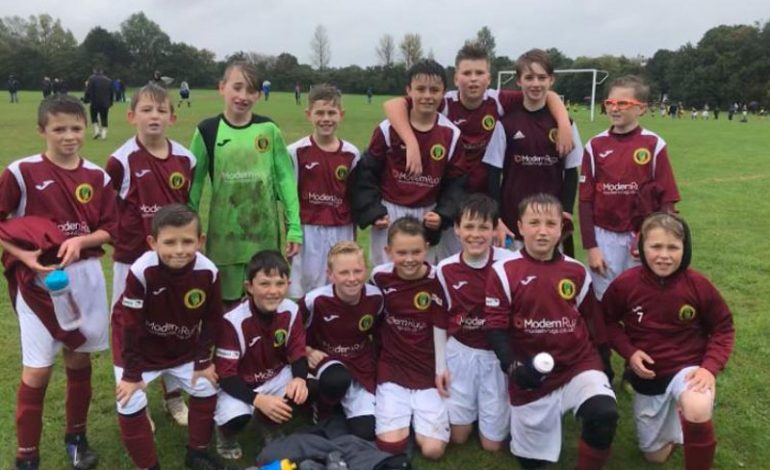 It was an unusually quiet weekend for the Aycliffe Juniors’ teams due to the weather resulting in many games getting cancelled and postponed.

The Under 8 whites travelled to Farringdon to play a very good Hetton side. Goals from Jonah, Joel and a hattrick from Jack rounded off a good performance. Joel walked away with the MOTM from this one.

The Under 8 Blacks were up against Ryhope in the horrible conditions. The lads started slow and although they started to play some much better football in the second half, it ended up a hard match for a team who’ll be looking to bounce back next week in hopefully some better weather. The Man of the match was Benjamin after a good effort.

The Under 9’s travelled to play Spraire Lads. In what was a tight game, Tyler scored for the Juniors. The man of the match award went to Harry for what was a great effort and some good passing and movement.

The Under 12s whites were against Billingham who were top of the league on a very wet Woodham pitch. This didn’t affect the team with Niall grabbing a hat-trick, Tyler and Dom getting 2 goals and Jayden, Brad and Jack all getting a goal apiece too. The man of the match was awarded to Harvey, it was a great performance from all the kids and a great effort from the dedicated coaches in the club to be able to get this game playable

The Under 11s Clarets were away at Hartlepool St Francis, a team who beat them twice last season. The pitch was a lot smaller than they were used to but that didn’t phase the players at all. Another strong performance with Aycliffe showing their flare by playing through from the back. Goals from Alex, Ashton, Kai, Harry, Jayden and Danny, all from fast attacking football, gave the home team a lot to contend with. Another spirited, quality performance. MoM was Kai who was a threat on the left wing all the way through the game.

The Juniors Under 13’s welcomed neighbours Newton Aycliffe Youthy at a rain-soaked Woodham. The Juniors were up for the derby from the off and raced into an early lead with headers from Lewis & Joe. An unfortunate own goal got the visitors back into the game before Dan H made it 3-1 to The Juniors. We sloppily conceded immediately to make it 3-2 before an own goal at the other end give The Juniors a 4-2 lead at half time. After a sloppy first half, a change in formation and personnel give the Juniors the motivation to go on and finish off the opposition. Dan H grabbed his second to make it 5-2 before Zak grabbed 5 superb second half goals against his former team to make it 10-2 at full time.

It was 1st v 2nd for the Under 15’s as they hosted Bedale. Unfortunately, they were second best on the day and lost against a strong side, they are looking for a good response next week and to bounce back with a win. Ben H was awarded man of the match from this fixture.