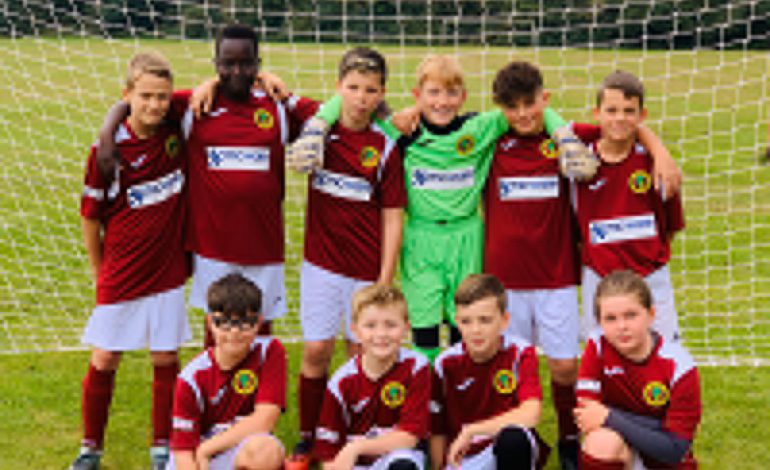 With the new season now well under way all of the Juniors teams were in action over the sunny weekend in another set of league matches.

It was a great effort by all teams who were pushing to climb their respective league tables.

The U7 Blacks travelled to Stockton for their first league game with a great team effort that included plenty of passing and brilliant individual work. Goal scorers were Regan, Harry and William. Man of the match went to William for a great attitude, teamwork and goal scoring.

The U7s Whites were up against Deerness Valley Thunder at New Ferens Park in Durham. The newly formed team scored their first league goal and are starting to show a massive improvement in their passing. A big well done to William W who was man of the match.

The Under 8 Juniors met Bishop St Mary’s at home. After a great game of football, goals from Alfie, Jack & Daniel still couldn’t get the Juniors the win. Man Of the Match for this game went to Jack for a great performance.

There was a much-improved performance from the U8 Blacks with two goals from Rhys, one from Max and one from Charlie. There was some great passing through the opposition and some brilliant goals scored. Well done to Rhys who was man of the match.

The U9’s were host to Darlington 21st Allstars in a very good game. Alfie R was awarded Man of the Match after a well fought draw.

The U10s bounced back from their away cup defeat last week with an outstanding away game vs Billingham Whites. The game saw George get a fantastic hattrick and Jack keeping them in the game with some outstanding saves and later Callum put away a penalty with Thomas making it 5 with a very clever chip finish. Motm went to goalkeeper Jack for a dominating goalkeeping performance.

There was a great home performance for the U11 Blacks against Birtley. Goals came from Alex, Leon, Jayden W, and Danny. Overall it was another great effort for a team who are excelling themselves in the early parts of this campaign. Alex earned himself a motm for this game.

U11 Whites were away to Linthorpe Academicals. Aycliffe dominated the first half and kept Linthorpe pegged back. A quality free kick from Jake meant they went in at half time 1-0 up. Linthorpe were quick out the second half and grabbed an equaliser. Henry was able to get onto a rebound to score, James also scored and another fine solo run from Ethan found him on the score sheet also.

U11 Clarets played their first game at home against Darlington RA Locomotives. Aycliffe started well and got into the game very quickly. Some great individual performances and link up play showed how far they’d came over the season break. Ashton, Kai, Alex & Jayden were on the scoresheet and the man of the match for this one was Harry.

U12 Blacks played their first game of the season at home to Hartlepool St Francis Royals. Aycliffe played well in the first half having most of the possession. Into the second half and the Juniors soon found themselves behind however they kept their composure and goals from Jake and Rhys did enough to grab all 3 points. The man of the match for this game was goalkeeper Lucas who pulled off some tremendous saves throughout the game.

The Under 12 Whites travelled to Stockton Town. In what was quite a quiet game for the Juniors, man of the match was given to Jack for keeping a clean sheet in goal, in what ended as a 0-0 draw.

The U13 squad travelled to meet unbeaten North Ormesby for their third away game of the season so far. It proved to be a nail biting second half after the Juniors went from 2-0 up to 3-2 down. Goals from Daniel H, Zak and the all important equaliser from Joe earned the Juniors a well deserved draw.

The Under 14s faced Seaham where after a hard game it was apparent it wasn’t Aycliffe’s day. However, Archie grabbed himself a goal and the team are looking to bounce back in their next fixture.

The U15 squad continued their fine form with another great win on Sunday, this time at home as hosts to Linthorpe Academical Clarets. Leon with a hattrick, Lewis with two goals, Dylan, Brandon and Jake Watson all grabbing them a goal each gave the Juniors an impressive 8-1 result! Man of the match was joint for Leon and Lewis, both with great performances during the game.