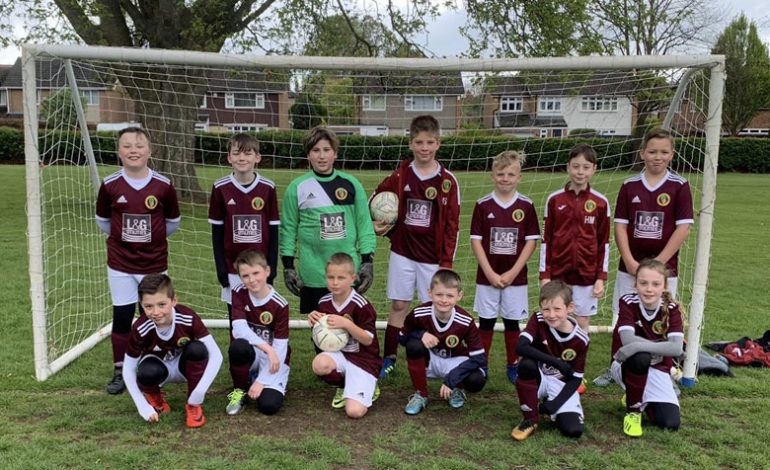 Whilst the Easter holidays were being enjoyed there were fewer games for the Aycliffe Juniors football teams, but over the last two weeks there has been the conclusion of league seasons for some teams and friendly games for others.

The Under 7’s White played an Easter friendly against Darlington 21st All Stars. Over the three twenty minute games ten goals were scored by Aycliffe with Jack R (4), Jack C (3), Ryan, Sammy and the mornings man of the match Tyler all on target. Their league programme also continued and they enjoyed a 4-2 win over Chester le Street with Jack R, Jonah, Alfie and an own goal providing the scoring.

The Under 8’s enjoyed an inter club friendly against the Under 7’s Juniors. All the players enjoyed the game and Jonah (2), Kai, Evan, Sam, Harry and Logan all got on the score sheet.

The Under 9’s played their final league game against Leven at Woodham. It was to be a tough test as the visitors had won the reverse fixture 10-0. Thomas though put Aycliffe ahead before Leven equalised. Thomas then scored again after a lovely passing move involving Oliver and Callum making the score 2-1 at the break. Leven improved and attacked well in the second half to eventually win the game 3-2. After a great performance the whole Aycliffe team were named as men of the match. The development game ended in a 6-0 defeat with the hard working Joe given the man of the match award.

The Under 10’s White had a busy time playing their final three league games. First up before the Easter break were Hartlepool St Francis and the Aycliffe team played the better football in the first half but couldn’t convert the chances created. Hartlepool were the better team after the break and went on win the game 3-0. Joel was named as man of the match.

They went on to play Eaglescliffe Elementis at Woodham and then travelled to Darlington TSC. Against Eaglescliffe they stormed to a 4-0 win with Ethan opening the scoring then Jayden adding goals either side of the break. Grace struck a stunning goal to mark a comprehensive win and the whole team were named as players of the match. In their last game at Darlington TSC a tight match ended in a 3-2 defeat. After being 3-0 down at half time goals from man of the match Ethan and Jayden were not enough to take any points. A nine a side development game followed with Jack scoring and Reiss the man of the match in a 3-1 loss.

The Under 11’s White played some great football in a midweek friendly against Crook. Niall (2) and Aidan got the goals in a 3-0 win. They then gained another friendly win against Darlington All Stars over the weekend. This one ended 4-1 with Jack C (2), Layton and Jayden scoring.

The Under 13 Russell Foster League team played a midweek match against Sunderland Athletic Pumas knowing victory would likely secure eighth place in the league. Man of the match Archie scored and several chances were created but the Pumas won the game 3-1. Their final league game saw them host second bottom Durham County Youth and if Aycliffe avoided defeat they would finish above their opponents. Aycliffe were 2-0 down at half time but Taylor scored to half the deficit with five minutes remaining. Sam then added a last minute goal to make the final score 2-2 which gave the team a ninth place finish in Division 4.

The Under 13 TJFA League team played their final league match against Billingham Synthonia at Woodham. They went 2-0 down in the first half but battled back after the break. Zack scored and they pushed for an equaliser but the game ended in a 2-1 defeat. This result saw them finish the season in ninth place in Division 1.

The Under 14’s are guaranteed at least seventh place in the league before their last two games are played. Their penultimate league game was away at second placed Greatham. They put in a great performance which deserved a win but narrowly lost 5-4. Dylan got a hatrick and Brandon also scored whilst Ben was named as man of the match. They will finish their season next week with a home match against Darlington 21st All Stars.

As this season comes to an end the club would like to extend their thanks to the players, coaches, volunteers and parents involved in running our teams for all their support throughout the year.