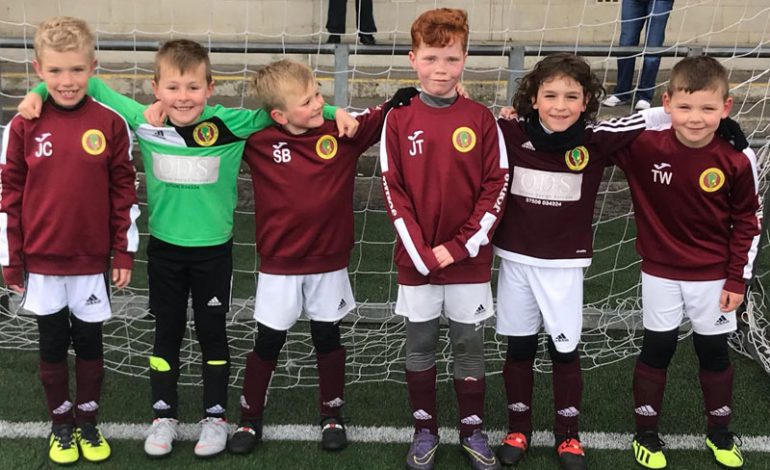 The Aycliffe Juniors football teams enjoyed both midweek and weekend games during the last week.

The Under 6’s played in a series of mini games at Newcastle United Academy on Wednesday. It was a great experience for all the players playing good football against talented opposition.

The Under 7’s Juniors had a midweek friendly away at Bishop Auckland St Mary’s. After a slow start they found themselves 3-1 down but they battled well to come back and win 10-3. The goals were scored by Jonah (4), Marley (3), Kai (2) and Alfie. Both Jonah and Dom played superbly and the man of the match award went to Dom.

On Sunday the Under 7’s Juniors played a friendly against Leven. A close game ended 3-2 to Leven with Daniel and Jack scoring the Aycliffe goals. The players also enjoyed a couple of mini games at seven a side and Alfie was the mornings man of the match.

The Under 7’s White played Pass Soccer Yellows. A great performance secured a 7-2 win. The goals came from Jack R (2), Joel (2), Jack C, Tyler and Sammy with Jensen named as man of the match.

The Under 9’s hosted Darlington TSC in a league game at Woodham. It was the visitors who scored first but a second half equaliser from Callum made the final score 1-1. Thomas was named as the man of the match. The development game ended in a 6-1 defeat with Wardy scoring and Theo picking up the man of the match award.

The Under 10’s White played a re-arranged league game on Tuesday night at Woodham against Darlington Young Bulls. It was 0-0 at half time then Ethan put Aycliffe ahead. After conceding an equaliser it was Grace who got the winning goal to give the Aycliffe team their first win in fifteen games. The man of the match was Max. The development game ended 4-4 with goals from Jack, Sam, Ethan and man of the match Jayden.

On Sunday the Under 10’s Whites hosted Leven who earlier in the season had beaten them 7-2. With confidence from their midweek win they put in a superb effort. Needing to come from behind twice they scored well taken goals from first Ethan and then Joel to seal a 2-2 draw. Danny was the man of the match as he stood in as keeper for the day. The development game ended in a 2-0 defeat with Jack working hard to claim the man of the match award.

The Under 10’s Claret played their final league game of the season at Stockton Hardwick Youth. Joe scored in the second half but the home team had put the game out of reach with four first half goals. Ashton was the man of the match.

The Under 13 TJFA league team travelled to high flying Stockton Town for their penultimate league game. A decent first half performance didn’t get its reward as the hosts led 3-0 at the break. Stockton then dominated the second half to run out 8-0 winners.

The Under 14’s played Bedale at home they started well but went a goal behind against the run of play. Goals from Jake and Dylan put Aycliffe 2-1 up but the visitors equalised making the final score 2-2. Brandon was the man of the match.

The Under 17’s travelled to Cargo Fleet for their final league game of the season. They were two goals down before Marcus scored his first. Marcus also added a penalty to keep his team in the game but the final score was 4-2. This game will be remembered for an interruption in play caused by motorbikes chasing a horse and cart across the pitch!