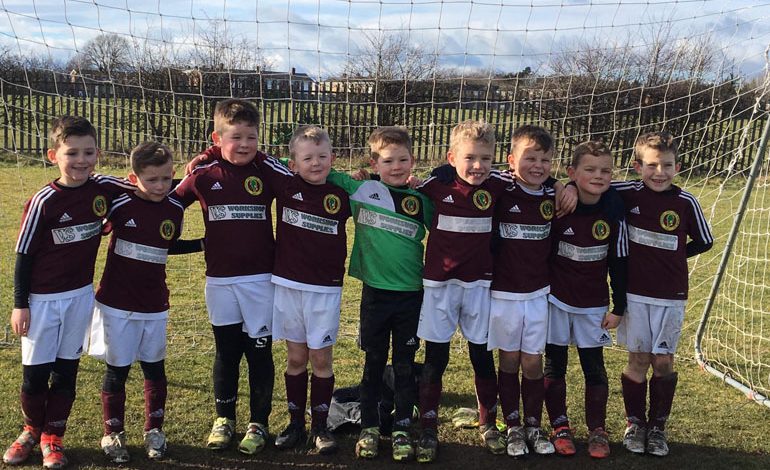 After all their matches fell foul to the weather last week it was a wet and windy return to action for the Aycliffe Juniors football teams this week.

The development team for Under 6’s played away at Swalwell. It was another great game for these young players with William scoring a fantastic five goals and Oscar also on target. All involved showed great skills throughout the game.

The Under 7’s Juniors played their last league game of the season at Woodham against Norton & Stockton. Man of the match Jonah scored both goals in a 3-2 loss. The development game ended in a 7-0 victory with goals from Daniel, Kai, Jonah then two each for Alfie and Jack.

The Under 8’s played at home against Billingham Synthonia in what was a brilliant game of football. Evan scored a great solo goal in a 3-1 defeat. The development game was lost by four goals to nil.

The Under 9’s reversed their fixture against Bishop Auckland St Mary’s to make use of their 4G pitch. It proved to be a great game with lots of chances. Zeke and Oliver nearly grabbed a winner in the final minutes but the game ended 0-0. George was deservedly named as man of the match. The development game ended in a 4-0 loss but it was good to see Finley return after injury and put in a man of the match display.

The Under 10’s Claret also chose to switch venues and play at Darlington FC’s 3G pitch against previously unbeaten opponents. Resilient defending kept the score at 0-0 then man of the match Ashton and Kai scored to open up a 2-0 lead. Darlington got one goal back but they couldn’t match the Aycliffe team who won 2-1.

The Under 10’s White ended their losing streak with a goal less draw against neighbours Sedgefield. The Churcher twins were outstanding in defence with Ethan named as man of the match.

The Under 11’s White hosted league leaders Leven. Their performance deserved more but the game ended in a 2-1 defeat. Jayden Bowes scored the goal and the man of the match was a jointly awarded to Jack Lowis and Harvey Lee.

The Under 11’s Black played away at South Park Rangers. After conceding the first goal Jake Smith made a great run and chipped the keeper to make the score 1-1. In the second half man of the match Jack Gibson made some great saves and ensured the game ended in a draw.

The Under 12’s hosted Hurworth Albion from four divisions and forty league places above them in the quarter final of the challenge cup. They put in a fine effort but were 2-0 down at half time. Then after three substitutions they got back in to the game when Zak scored with a cool finish. They couldn’t find an equaliser but this was a great performance against a team playing at a much higher league level. The man of the match was Lewis.

The Under 13 Russell Foster League team travelled to play Whickham. They came away with a 1-0 win despite losing Archie and Lewis to injury and finishing the game with only nine players. The only goal of the game came from Herbie’s first half penalty and the whole team were named as men of the match.

The Under 13’s TJFA league team hosted high flying Marton FC Blues. They had a tough day at the office and eventually lost 9-0.

The Under 14’s put in a great effort at home against Shildon creating several chances. They came away 4-1 winners with McKenna scoring one goal and man of the match Dylan Maughan grabbing a hatrick.

The Under 17’s travelled to Kader and after a much improved effort it was disappointing to concede two late goals and lose the game 2-0. Elliot Dixon was the man of the match after an assured performance at right back.