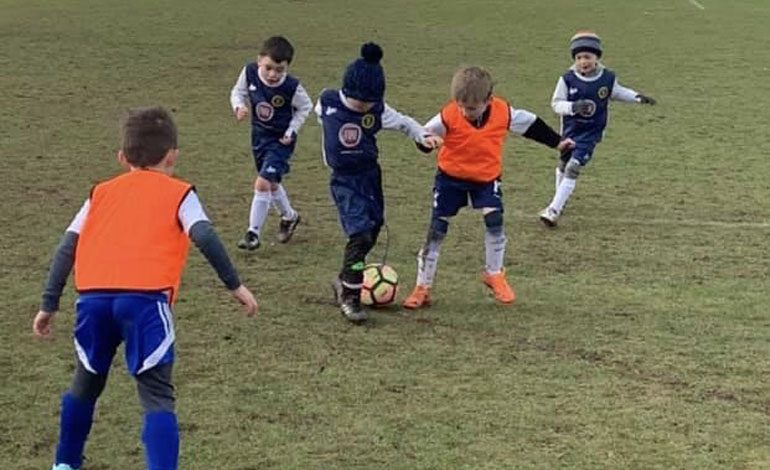 The football season continued for the Aycliffe Juniors teams with plenty of teams in action and some great results.

The development players enjoyed a friendly with the Under 6’s playing against the newer Under 7 players to give them some match experience. This was enjoyed by all with some great skills on show.

The Under 7’s White completed their Russell Foster winter mini league with a good 9-2 win against neighbours Shildon. The players have developed throughout this part of their season and showed some great skills in the fixture. The scorers this week were man of the match Jack R (5), Jack C (3) and Joel with one.

The Under 7’s Juniors played away at Darlington FC Quakers they started well and were 2-0 up. Darlington though grew in to the game and at one point were 5-3 ahead before Aycliffe dug deep to come from behind and win 8-6. The goals were scored by Daniel (4), man of the match Jonah (3) and Alfie. In the development game Aycliffe won 7-5 with Marley (2), Kai (2), Jonah, Alfie and Jack C on target.

The Under 10’s Claret played 21st All Stars at home. They started well but were unable to capitalise and it was the All Stars who took a 1-0 lead with a scrappy goal. It looked as though the game would end with that score but a last minute equaliser from man of the match Kai made the score 1-1 giving Aycliffe a share of the points

The Under 12’s played Greatham at home it was a blustery first half and Jake gave Aycliffe the lead with a great long shot. That lead was doubled when Zak showed great skill to release Jake to score again. Greatham had the benefit of the wind in the second half but great saves from Noah and defending from Lewis, and man of the match Cody, limited the visitors to one goal and secured a 2-1 Aycliffe win. This reuslt made it an impressive seven games unbeaten for the team.

The Under 13’s Russell Foster League team faced Jarrow United at Woodham. A closely fought game ended with defeat by the odd goal in five. Kamil and Charlie were on target for the Aycliffe team.

The Under 13’s TJFA league team played against league leaders Marton Whites who included a couple of recently signed ex Aycliffe players. The Aycliffe team battled well to keep the game goalless at half time. At the start of the second half a couple of chances were missed but then Marton finished strongly to secure a 3-0 win.

The Under 14’s saw their seven game unbeaten streak come to an end with a 9-3 loss at home to second placed Leven. It was a hard game in tough windy conditions and the man of the match was Lewis Hardy.