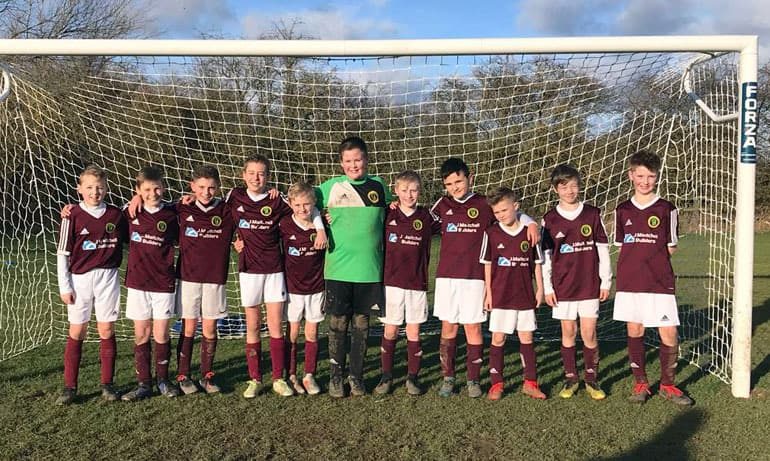 Another weekend of footballing action for the Aycliffe Juniors was enjoyed by all their players and supporters.

The Under 6’s played a development game away at Durham City they faced both tough opposition and a strong wind. William scored a hatrick with Regan and Finley also on target in a brilliant match.

The Under 7’s White faced high flying Durham City Colts and put in a great performance. There was a hatrick for Jack C and two goals each for man of the match Jack R and Tyler in a fine 7-2 win.

The Under 7’s Juniors played against Wynyard at Woodham and managed some difficult conditions in a first half that ended 3-3. After the break they capitalised on the wind to win the match 10-3. The scorers were Jack C (3), Kai (3), Daniel (2), Jonah and Marley. In the development game a further ten goals were scored by Jack C (3), Jonah (2), Dom, Dan, Kai, Mason and Marley with the whole team named as men of the match.

The Under 8’s played away at Middleton Rangers and came off second best in the league game. The final score was 4-1 with Jack getting the Aycliffe goal and Alex the man of the match. The development game ended in a 5-1 win and the goals were scored by Sam (2), Evan (2) and David.

The Under 9’s played away at Stockton Town they dominated the first half and Thomas hit the bar twice. However the more clinical hosts went on to take the lead and at half time the score was 2-0. Jamie and man of the match Preston were strong in defence but the Stockton pressure told and they won the game 5-0. In the development game Oscar and Callum scored in a 3-2 loss with Zeke named as man of the match.

The Under 10’s Claret faced Hartlepool St Francis they played well in the first half and hit the post with one shot but the game was goalless at the break. Hartlepool were stronger in the second half and won 3-0, Harrison was named as the man of the match.

The Under 11’s White enjoyed an exciting game against Bishop Auckland Kings. They twice went behind after conceding from corner kicks. However Niall Armstrong and then Jayden Bowes scored equalisers and the match ended in a 2-2 draw. The man of the match was Connor Maitchell.

The Under 11’s Black were away at Hardwick Youth. They were 2-0 down before Jake made a great run from half way before scoring to half the deficit. The home team stared the second half 3-1 up but the Aycliffe team were on form and man of the match Jake completed his hatrick with Noah also adding two goals in a great 5-3 win.

The Under 12’s played really well to beat Normanby 5-0 at Woodham. There were five different scorers with Ellis, Charlie, Jayden, Thomas and man of the match Zak each getting a goal in a comprehensive win.

The Under 14’s remain unbeaten in their last six matches after a 2-2 draw against local rivals Sedgefield. Jake Wilson and Jacob Hume both scored to open up a 2-0 lead but goals were conceded in the last minute of each half and the points were shared. McKenna was the man of the match.