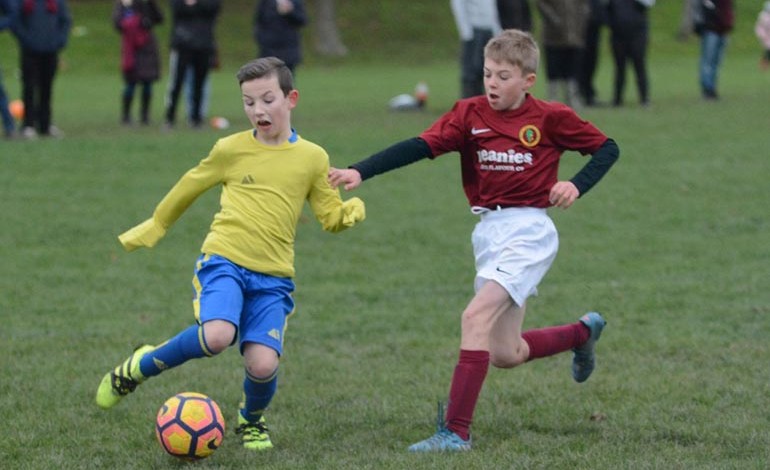 Aycliffe Juniors football campaign progressed another week with lots of games across the age groups. Lots of teams were in cup action and looking to progress to the latter stages of these competitions.

The Under 7’s played in the quarter final of the League Challenge Cup against Boro Rangers ‘Yellow’. This was an excellent game of high quality football but the Aycliffe team narrowly lost out as the game ended 2-1. Boro Rangers scored both their goals in the first half and this led to a great Aycliffe comeback effort in the second half. Thy piled on the pressure and hit the woodwork as well as shots narrowly missing the target. Dylan’s free kick halved the deficit but the equaliser did not come and the game was lost. The second friendly game was enjoyed by all with Thomas and Joshua named as the mornings men of the match.

The Under 9’s Russell Foster League team were looking to get back to winning ways after two recent narrow defeats. They were up against Ouston Juniors and started with some great passing and movement. There was no score in the first half and Jack pulled off a great save in the second half before Noah scored after Jake’s shot was blocked. The man of the match was Lucas who put in a great performance in this well earned 1-0 win.

The Under 9 TJFA league team were in the third round of the League Challenge Cup at home and against Boro Rangers ‘Green’. The hosts were in fine form and put in one of their best ever performances in an 8-1 win. The interplay between James, Connor, Harvey, Jayden, Niall and Rhys was excellent. Lots of chances were created and Niall opened the scoring, Jayden then scored before Niall’s second made it 3-1 at half time. Second half goals were scored by Jayden, Will, Dom with Niall getting two more to end the game with four goals. The second game was also won and Harvey and Jack were named as the days men of the match.

The Under 11’s Russell Foster League team played a league game against Sunderland Athletic. They started well and had attempts on goal before being caught on the break to go behind. Taylor scored two good goals in the second half but the team could not avoid defeat. Taylor and Ted shared the man of the match award if this game.

The Under 11’s TJFA league team were playing in the fourth round of the League Cup at Sunnydale against Spraire Lads Panthers and were far too strong for the visitors. Lucas opened the scoring before Jake P added two goals. Evan was next to score and Jacob’s two goals made it 6-0 at the break. Another six goals came in the second half as Jacob got three more to end up with an impressive five goals, Charlie added two and Zack also hit the back of the net in a comprehensive 12-0 win.

The Under 12’s were playing in the second round of the League Challenge Cup at home against TIBS Yellows who compete three leagues higher than the Aycliffe team. It was a determined effort but the home side were defeated by stronger opponents.

The Under 15’s were in league action away against Kader FC and played out an exciting 4-4 draw.

The Under 17’s were in the quarter final of the League Challenge Cup against Billingham Synthonia and came away with an impressive 4-0 win. The Aycliffe team were dominant throughout and goals from Jimmy and Kieran made it 2-0 at half time. In the second half Kieran scored again and Ryan added another to seal the win. It was the teams first clean sheet of the season and now a semi final awaits this talented group of players.