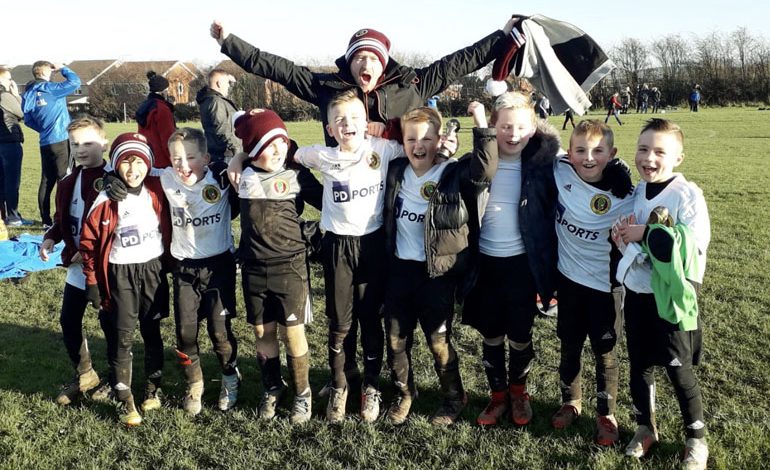 It was the final round of fixtures in 2018 for the Aycliffe Juniors football teams at the weekend. A few teams had no scheduled match and were already getting ready for Santa but others were involved in some great games.

The Under 7’s Whites braved some cold conditions and put in a very good display. Their efforts resulted in a 7-3 win with two goals each for Jack C, Jack R, Joel and one for Tyler against Pass Soccer Yellows.

The Under 7’s Juniors played away at Norton and Stockton they won the league game 7-4. The goals were scored by man of the match Alfie, Daniel, Jonah, Kai with two from Jack C. The development game was won comprehensively with goals from Jack C (5), man of the match Daniel (4), Dom (3) and Kai (2).

The Under 9’s travelled to face Skelton United in the challenge cup and progressed to the next round with a 5-1 win. Callum (2), Oscar, Thomas and Stephen scored the goals. Jack was the man of the match after a great defensive performance. The development game was won 2-1 with Jack and man of the match Stephen scoring.

The Under 10’s White were away at Hartlepool St Francis and some great saves from man of the match Ido kept the score 0-0 at half time. They kept battling in the second half but a defensive mix up led to Hartlepool scoring to win the game 1-0.

The Under 10’s Claret faced Darlington 21st All Stars at Woodham they started well and scored first. The talented visitors got a goal back but Aycliffe maintained their positive form to win 4-2. There was a goal each for Joe and Ashton with two scored by man of the match Kai.

The Under 11’s Black played at home against Redcar Town Royals Jake and Rhys both scored equalising goals after they had gone 1-0 and then 2-1 down. In the second half Redcar scored two more goals to win 4-2. Emrehan was the man of the match and there was also a strong debut from Lucas.

The Under 11’s White made the short trip to play Bishop Auckland St Mary’s Kings. A tough match ended 3-2 to the home team with Niall and man of the match Jayden scoring the Aycliffe goals.

The Under 12’s travelled to play Kader FC and came home happy with a 2-1 win. Zak gave Aycliffe the lead but Kader pulled a goal back before the break. There was some great football played in the second half and it was good to see Jayden coming back in to the team after a six week injury absence. It was Zak who went on to score the winner and Lewis was named as man of the match.

The Under 13’s TJFA league team were the oldest team in action and they played away at Leven. The effort from last weeks home win was shown in parts of the first half with Zack and Lucas scoring to keep them in the game with the score 3-2 at the break. The second half performance was below standard as they slipped to a 6-2 defeat.