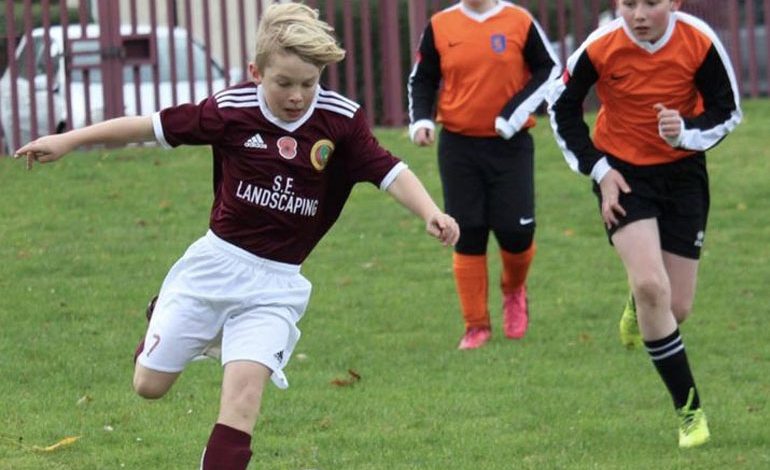 Remembrance Sunday brought another round of Football games to the Aycliffe Juniors teams. Another minutes silence preceded all matches this weekend to remember those lost in conflict.

The Under 7’s bounced back from last weeks defeat to beat Crook Town Hornets 4-2. Jack R got a hatrick and Jack C also scored.

Under 7’s Juniors played a home friendly against Seaton Carew. They started slowly then built a 6-0 lead, the visitors fought back and the match ended 7-3. Jack C scored a hatrick, Kai scored two and there was one goal each for Dan and Marley. Dom was named as man of the match.

The Under 8’s faced a strong Bishop Auckland St Mary’s team. Alex scored in the league game and Trent was on target in the development game but both matches ended in defeat. The final scores were 5-1 and then 6-1.

The Under 9’s played at Darlington Spraire Lads. George was welcomed to the team and he played his first game. Thomas scored a late goal in a 4-1 loss after early pressure wasn’t converted and the hosts had opened up a 4-0 lead. Josh scored with a stunning strike in the development game and Jamie was the morning’s man of the match. Huge thanks to PD Ports for providing the team with a great new away kit.

The Under 10’s Clarets also played away in Darlington and faced 21st All Stars. They were really positive in how they began and ended the game but the 100% effort could not secure a win. Ashton was the man of the match.

The Under 10’s Whites hosted neighbours Shildon Reds at Woodham and looked great in new kits kindly provided by L&G Utilities. The game was even in the first half with neither team scoring. Shildon managed to take a 2-0 lead but Aycliffe then grabbed a goal back and pushed for an equaliser in the last five minutes. There were no further goals though and the game ended 2-1 with goal keeper Ido named as man of the match.

The Under 11’s Whites has a tight game against Darlington Spraire Lads. Niall Armstrong scored for Aycliffe as this match ended 1-1. James Chadwick was the man of the match on a day when both teams had chances to win but a draw seemed a fair result in the end.

The Under 11’s Black played Great Ayton at home. After going 2-0 down Rhys and Jake scores to make the score level at 2-2. Rhys scored again but unfortunately the hosts also fired in goals and the score moved to 6-3. Jake also added another before the final whistle and man of the match Jack pulled off some great saves, the final score was 6-4.

The Under 12’s continued their great run of form away at Normanby. There were two goals each for Thomas, Zak and Charlie in a superb 6-0 win. The teams dominance was apparent as several other chances were created. Thomas Francis was the man of the match.

The Under 13’s Russell Foster league team played away at Jarrow. They found themselves 4-2 down at half time and then scored next to get back within one goal. They had chances to draw level but didn’t take them and the match ended 6-3. Taylor scored a hatrick for Aycliffe and a special mention to man of the match Charlie who pulled off some amazing saves as a stand in goalkeeper.

The Under 13’s TJFA League team travelled to Billingham Synthonia. Zack finished off a good move in each half to end the game with two goals. Unfortunately the more clinical Billingham team converted their chances to win the match 6-2.

The Under 14’s made the short journey to play Shildon. They put in a really solid performance and it was good to see both McKenna and Dylan make their debuts. Goals scored by Lewis, Brandon, Jacob and an own goal ensured a great 4-1 win.

The Under 17’s played top of the table Bishop Auckland and they were 4-0 down at half time. In the second half there was a much better performance and Cam Martin scored making the final score 5-1. Good debuts were enjoyed by Aidan Fletcher and Kieron Jobling with Harvey Wardle named as man of the match.