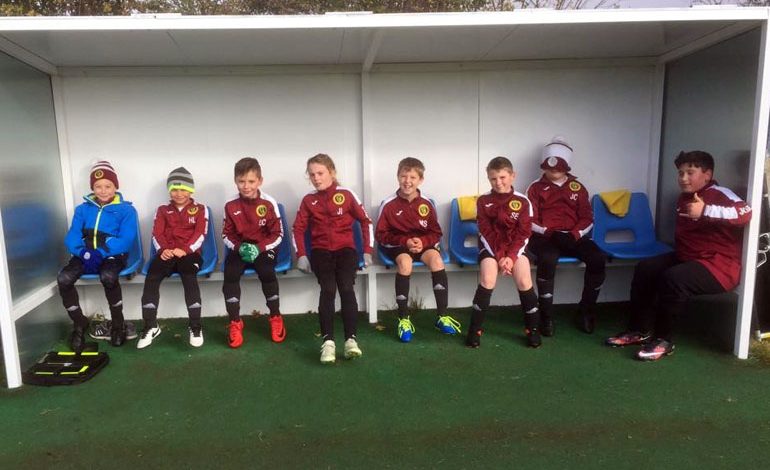 With a blast of wintery weather stopping games that were planned for Saturday, it was just the Aycliffe Juniors TJFA League teams in action on Sunday last weekend.

The Under 7’s had a tough trip to Seaton Carew and despite another hatrick from man of the match Jack C and a brace from Kai they couldn’t get the win.

The Under 8’s travelled to play Billingham Synthonia. In the league game Evan and Alex scored in a 4-2 loss. The development game was won 2-0 with Sam and David getting the goals.

The Under 9’s squad was limited by holidays and injuries so they had just the required seven players for their game against Wynyard. Thomas score once in the league game and twice in the development game. The team lost the league fixture but drew the second game and Theo was the days man of the match.

The Under 10’s White enjoyed a great matchday experience with Newton Aycliffe on Saturday. On Sunday they played at Eaglescliffe Elementis. It was a tight game but two second half goals from the hosts gave them the win. Joel and man of the match Jayden both scored in the development game.

The Under 10’s Claret made the journey to play Hartlepool St Francis. They were 1-0 up at half time after Kai scored. In the second half the team tired and lost out. Lewis was the man of the match.

The Under 11’s Black were away at Leven White. They started well but ended the first half 3-0 down. Noah and Jake scored to get back in to the game but this ended in a 5-2 defeat. Jacob was named as man of the match.

The Under 12’s lost 4-1 away at Trimdon. Zack scored the goal and Cody was the man of the match.

The Under 13’s continued their tough start to the season and travelled to high flying Whinney Banks. They were well beaten on this occasion as the game ended 9-0.

The Under 14’s put in a great performance at Woodham against Brompton Juniors. Man of the match Brandon scored a hatrick and Sammy Clark added another in a 4-2 win. This was even more impressive as six regular players were unavailable.