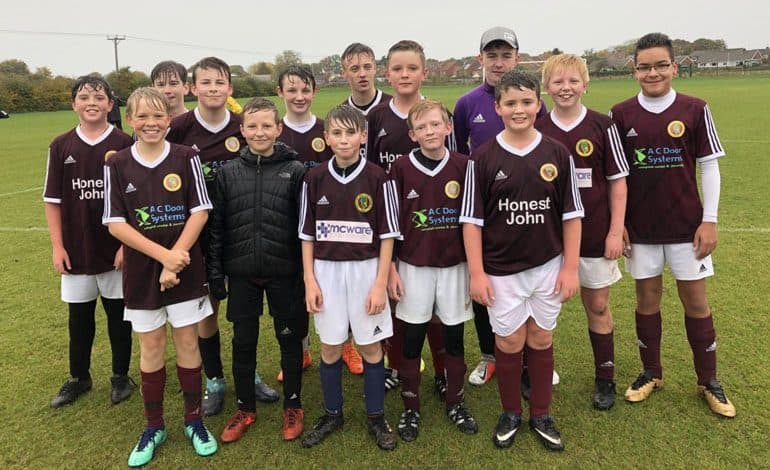 It was a wet and windy welcome to the pitch for the Aycliffe Juniors football teams at the weekend.

The Under 7’s Whites faced fellow unbeaten team Durham City Juniors. A hat-trick from Jack C was not enough to win the game with the final score showing an 8-3 loss.

The Under 7’s Juniors travelled to play Wynyard Village Youth and after a slow start they went on to win 5-3. Jack C again got a hatrick with Kai and an own goal completing the scoring. The development game also ended in victory with Kai (2), Daniel, Mason, Marley and man of the match Dom scoring.

The Under 8’s faced a physical Billingham Juniors team at Woodham. A tight first half ended 0-0 then in the second half Aycliffe went on to create several chances. The deserved winner came when Alex scored the games only goal with a few minutes left. The development game saw Billingham race in to a 4-1 lead and Aycliffe come back fantastically to win 6-5 with Alex (2), Harry (2), Jack and Evan getting the goals.

The Under 9’s travelled to play Hartlepool FC Youth, there was some lovely football played early in the game and this led to a well worked goal, scored by Oliver. The match though ran away from the Aycliffe team as they lost out 8-1. The development game was much closer with Preston and Oliver scoring in a 3-2 loss. The mornings man of the match was Kenyon.

The Under 10’s Clarets played Hartlepool Stranton at home in another tough game. A battling first half performance kept the game goal less as the teams changed ends. After then going 2-0 down in the second half man of the match Ashton scored to make it 2-1 and Aycliffe looked the better team. They pressed for the equaliser but conceded in the dying seconds so the game ended 3-1.

The Under 11’s White lost out 2-0 away at Redcar Town with Connor Maitchell putting in a man of the match performance.

The Under 11’s Black played Prissick Rovers at home and raced in to a 3-0 lead as Jake scored a quick hatrick. This lead was doubled before half time as Rhys, Jayden and Noah added further goals. Their fine performance continued after the break as man of the match Jake added two more goals along with Jayden and Noah scoring again in a 10-1 win.

The Under 13’s Russell Foster League team played away at Durham County Youth. In the first half they couldn’t get a foot hold in the game so they found themselves 1-0 down at the break. A determined second half effort saw Herbie score a hatrick and Ted add one goal as they came away 4-1 winners. Reuben and Herbie shared the man of the match award.

The Under 13’s TJFA league team traveled to play Boro Rangers, the only team in Division one with a 100% record from their opening games. Despite Aycliffe going 2-0 down they battled well and goals from Lucas, Zack and Charlie brought the game level at 3-3 with ten minutes left. Aycliffe looked the better team and created chances but couldn’t get the winner and this one ended 3-3.

The Under 14’s won a great game away at Bedale with all fourteen lads showing great effort. Sammy Clark got the goal in this 1-0 win and Ben Hitch was the man of the match.

The Under 17’s faced Thirsk at Woodham, a tight first half ended 0-0 but the game opened up in the second half. Unfortunately it didn’t go the home teams way and Aycliffe lost 5-2.