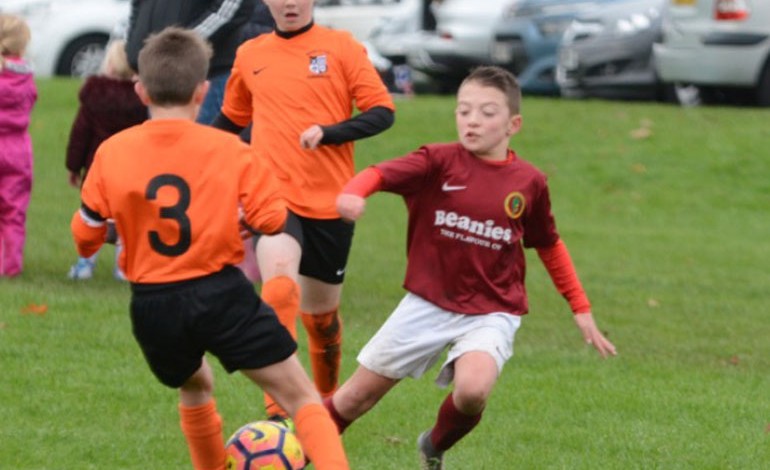 The Aycliffe Juniors footballing exploits continued with further matches enjoyed over the weekend which saw the Under 7’s winning our first title of the season.

The Under 7’s wrapped up their first league title with a 4-2 win away at Stranton FC. It was their toughest challenge of the season so far. Dylan’s hatrick and Alex’s goal secured what was an impressive and hard fought win. They lost the second friendly game with Dylan and Oliver named as the mornings men of the match.

The Under 9 Russell Foster league team were playing North East Sports United at Castle View Academy. They didn’t start well and Jack was called upon to make a great save, shortly after though they went 1-0 down. A great team goal involving Noah and Jay was finished by Jake and it was 2-1 at half time. Charlie had one effort disallowed and then shot wide but the next goal went the other way. Lucas scored a great diving header for Aycliffe and the final score was 3-2. Jake Smith was named as the man of the match.

The Under 9 TJFA league team hosted Spraire Lads in a top of the table clash. It was 0-0 at half time despite some great passing play from James, Connor, Jayden, Dom and Niall. It was a very tight affair and the visitors scored first with Aycliffe going close through Harvey. There was no further score and this game ended 1-0. The second game saw a 5-2 win and the mornings men of the match were Dan and Jack.

The Under 10’s were away to Hartlepool based Saxon Juniors. Jake had a great early run beating two defenders and he was inches away from opening the scoring. After a couple of errors saw the team go behind Jake hit a lovely free kick but was denied a goal by the cross bar. Zak came on and got one goal back but as Aycliffe pushed for the equaliser two more goals were conceded in a 4-1 loss.

Of the two under 11 teams it was just the TJFA league side playing this week. Middleton Rangers visited Sunnydale for this game and the Aycliffe team were in good form. Jacob scored from the edge of the box and Jake P doubled the lead before the break. In the second half Lucas and Charlie both scored and Jake P converted a penalty to make it 5-0. The visitors got one back before Jacob and Charlie scored again in a 7-1 win.

The Under 17’s hosted Middleton Rangers and stormed in to a 2-0 lead with Jamie and Kieran on target. A sloppy period before half time saw the visitors draw level at 2-2. In the second half Kieran scored from the penalty spot and Lewis added another in a 4-2 win.

The Under 23’s were in the quarter finals of the league cup away at Peterlee. A terrific strike from the hosts after 35 minutes opened the scoring and then a penalty doubled their lead. Aycliffe got one back but could not find the equaliser and it ended 2-1 with Liam Craggs named as the man of the match.