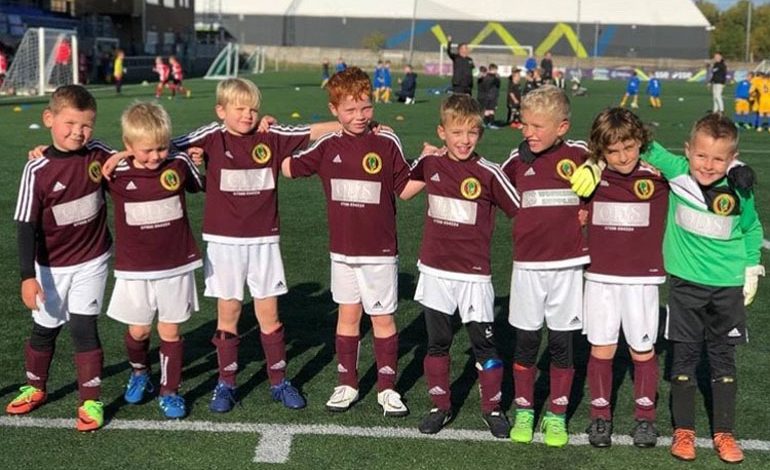 It was another weekend of footballing action for the Aycliffe Juniors teams. All the teams put in a great effort and there was a wide range of results.

The Under 7’s Whites were in Russell Foster League action and came away 5-2 winners against Pass Soccer. The goals came from a Jack R hatrick, Jack C and Tyler to keep up their teams unbeaten run.

The Under 7’s Juniors came away 6-4 winners after playing Stockton Town Yellows. A Jack C hatrick and goals from Kai, Jonah and Marley were enough to ensure victory. The man of the match was Jonah Harrop. This is a great turn around as they lost 7-1 to the same team a few weeks ago.

The Under 8’s continued their unbeaten start to the league season with a 6-1 win against Leven. The scorers were Evan, Sam, David, Alex and Jack (2). The development game was also won, this time 5-3 with goals from Evan (2), Sam (2) and Trent.

The Under 10’s Whites continued their winning ways with a dominant display at Darlington Young Bulls. Ethan, Jayden and Sam each got a goal in a 3-0 win. The player of the match once again was Grace.

The Under 10’s Clarets faced Hartlepool Youth at Woodham and started well with the half time score 1-1. In the second half two easy goals were conceded to make it 3-1 to the visitors. The Aycliffe team created chances and had a shot cleared off the line but the game ended in defeat. Harry was the goal scorer and Ashton the man of the match.

The Under 11’s Whites were victorious in a friendly game at Redcar Town by four goals to one. Jayden (2), Connor and Aidan were the goal scorers.

The Under 11’s Blacks lost out against Hardwick Youth. This was a great game against physical opponents. Jake scored four goals and Jack G was the man of the match as this team continue to make positive progress.

The Under 12’s suffered a 3-1 loss at Woodham against Trimdon. Charlie Brown got the goal and Thomas Francis was named as man of the match.

The Under 13 Russell Foster League team were in cup action against Durham County Diamonds from the league above. It was tight for the first forty five minutes but then Durham ran away with the game and won 8-1.

The Under 13’s TJFA League team lost a tight game against Boro Rangers. They changed ends three goals down after a sloppy start but came back with goals from Dom, Will and Evan making the score 4-3 in the closing minutes. The Aycliffe team thought they had scored the equaliser but this was ruled out for offside and the game ended in defeat.

The Under 14’s played away at New Marske. A poor first half saw them 4-0 down at the break. A much improved second half performance made the final score 4-1.

The Under 17’s were in action at Woodham against Cargo Fleet and a fiery first half ended with both teams down to ten men. It was the visitors who went on to win this one 4-0.