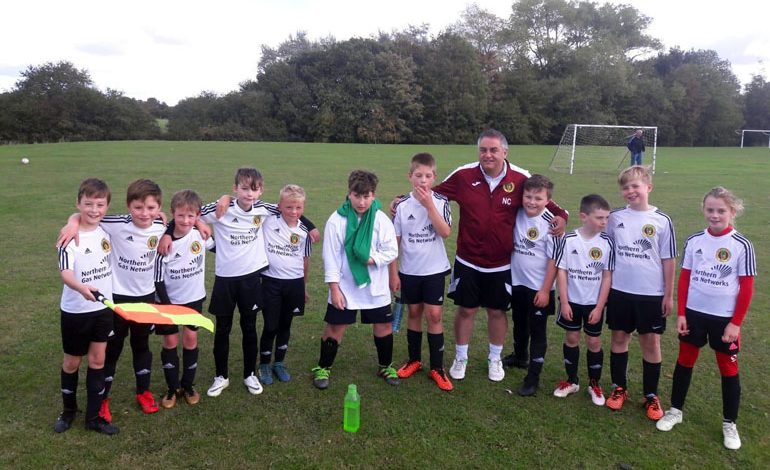 The Aycliffe Juniors football teams were back in league action over the weekend. Our teams continued their seasons with a variety of results.

The Under 7 Juniors played an excellent Leven team. They came away defeated but enjoyed the match and put in a fine effort.

The Under 8’s were away at Bishop St Mary’s and went ahead with a goal scored by Harry Dunn. Bishop scored a late equaliser to make the final score 1-1. Aycliffe won the development game 4-3 with Alex, Layton and Harry Adderly (2) the scorers.

The Under 10’s ‘Whites’ played their first game at Woodham against Darlington 21st All Stars Jets. They went 1-0 down but their persistence paid off as goals from Ethan and Jayden secured a 2-1 win, the player of the match was Grace.

The Under 10’s ‘Clarets’ played away at Greatham, they put in a great performance and broke through the home defence on several occasions. However they could not capitalise on their breaks and their more clinical opponents won the game 3-0. The games man of the match was Roman.

The Under 11 ‘Whites’ were in a tight game at Woodham against Darlington Spraire Lads. A man of the match performance from James Chadwick was not enough to prevent a 1-0 defeat.

The Under 12’s had an exciting game against Kader at Woodham. Two goals from Daniel and one for Charlie B were scored but the game ended in a 4-3 defeat. Charlie E was named as man of the match.

The Under 13 Russell Foster League team continued their unbeaten start to the season with a 4-0 win against Shotton Colts Blues. Herbie scored a brace with Noah and Taylor also scoring. There were plenty more chances as well with the woodwork hit on a number of occasions.

The Under 14’s played at home against Greatham. They went 3-0 down after ten minutes but two goals from Sammy Clark got them back in the game. It was the visitors though who scored next and won the game 4-2. The man of the match was Jake Watson.