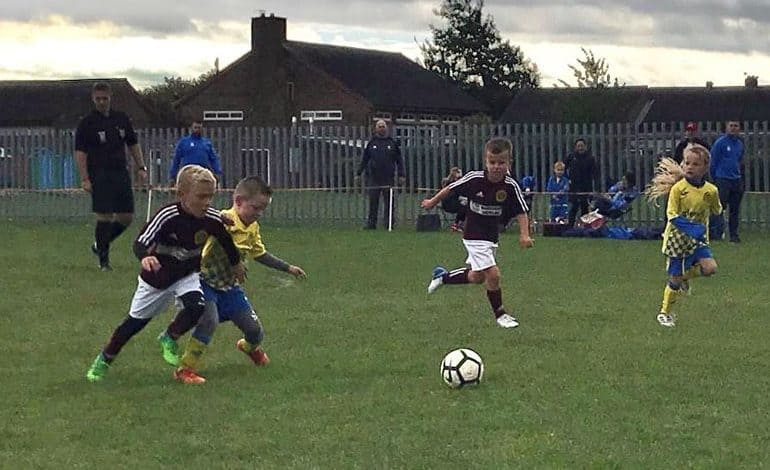 The second weekend of the football season saw the Aycliffe Juniors TJFA teams competing in the first round of the league cup.

The Under 7’s ‘Whites’ kept up their winning ways with a 2-1 league win against Improtech Soccer Reds, Jack scored both goals.

The Under 7’s ‘Juniors’ played their first cup game against Hartlepool St Francis and won the game 6-2. Kai scored five goals and Jonah added one. The development game was also won with Jack C (2), Jonah and Dom on target in a game that ended 4-1.

The Under 8’s faced Hurworth Albion from the top division in their first round game. They battled back twice in the game with goals from George, Sam, Alex and David but ended up on the wrong side of the 6-4 score line. In the development game Logan and Evan scored in a 6-2 loss.

The Under 9’s were given a tough task playing Richmond Town in the cup and lost out 8-2.

The Under 10’s ‘Clarets’ put in a great performance away at Primrose Hill matching a tough physical team. A late goal for the home team gave them a 2-1 win. Harry was the Aycliffe scorer and Harrison was named as man-of-the-match.

The Under 10’s ‘Whites’ were involved in an exciting game at Billingham. Jayden and Ethan scored to put them in to a 2-1 lead however an equaliser came late in the game from the penalty spot and this match ended in a draw. Goalkeeper Ido was the man-of-the-match for the second week running. The development game was won 4-3 with Henry scoring a hatrick and Sam also on target.

The Under 11’s ‘Blacks’ lost out by the odd goal in nine in a tight game against Guisborough Town.

The Under 13 Russell Foster League team played their first league game at Woodham against Foundation of Light Reds and won 3-1. Taylor’s lobbed shot opened the scoring then Kamil’s chip made it two before Sam rifled in a great free kick. A late consolation goal was conceded which finished off the scoring.

The Under 13 TJFA League team hosted Stockton Hardwick Youth from a few leagues lower in the structure and controlled this cup game to win 10-1. Zack and Lucas both scored two with a goal each going to Liam, Robert, Frazer and Dom along with a couple of unfortunate own goals.

The Under 17’s played Redcar Royals in a league game at home. They came away from a hard fought game as 4-3 winners. The goals came from Marcus BB, Jack B, Lewis H and a screamer from Lewis W to secure the points. Special mention to Andy Burrows who played in goal as their ‘keeper was unavailable.