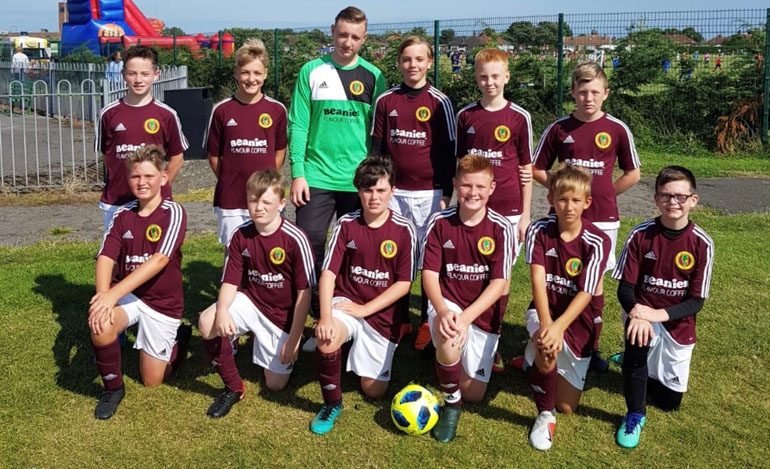 The Aycliffe Juniors football teams welcomed in the new league season over the weekend.

Everyone was excited to get things underway with a growing number of teams throughout the club and many new players ready to enjoy the action.

The new season also marked our return home to play matches at Woodham Academy. There has been a great effort to get all the pitches ready for the big kick off, thanks to everyone involved in this for their hard work.

The Under 7 ‘Whites’ kicked things off with a great 8-0 win against Fast Feet Madrid FC. Jack R struck a hatrick, Tyler and Jack C bagged braces with Joel also on target.

The Under 7 Juniors had a tough first game at Woodham against Stockton Town. Jack Collingwood scored Aycliffe’s only goal in a 7-1 defeat.

The Under 8’s chalked up more than twenty goals across two games away at Hartlepool Youth so started their season with a bang. There were an amazing seven different goal scorers over the two games, Jack led the way with seven goals, Sam scored four, Alex, Evan and David each got three, George netted twice and Logan once.

Injury and illness reduced the Under 9’s to six fit players for their first seven a side game. Great commitment from the lads who played couldn’t prevent defeat against Stockton Town.

The Under 10’s ‘Whites’ made the short trip to Shildon and lost out 9-1 in the league game and 4-1 in the development game.

The Under 10’s ‘Clarets’ played at Woodham Academy against Greatham. A goal from Danny and a man of the match performance from Ashton was not enough to avoid a 4-1 defeat.

The Under 11’s ‘Black’ lost out to Redcar despite goals from Charlie and Reece. The man of the match for a fine effort, and his goal was Charlie.

The Under 11’s ‘Whites’ had a tough opening match against Boro Rangers and a hard fought game ended in a 0-0 draw. James Chadwick was named as man of the match after a great performance.

The Under 12’s gained a great 4-1 win at Darlington 21st All Stars. There was a hatrick for man of the match Thomas Francis and a goal for Zak.

The Under 13 TJFA league team faced a tough opening game away at Marton Blues but got the first goal through Charlie B. A tight match changed ends with Marton 2-1 up and then a further three goals in a five minute spell sealed the win for the home team. Lucas got a goal back as the game ended with a 6-2 defeat.

The Under 13 Russell Foster League team started off with a 3-3 draw away at Shotton Colts. They were 3-1 down at half time but battled back to draw. The goals came from Herbie, Charlie and a screamer from Sam.

The Under 14’s started their campaign with a 3-1 home win against Cargo Fleet. This great result was just what the performance deserved and all seventeen players involved made positive contributions.

The Under 17’s travelled away to play Thirsk. A good effort saw the teams level at 1–1 going in to the last minute. Unfortunately it was Thirsk who got the late winner and the game ended 2-1.