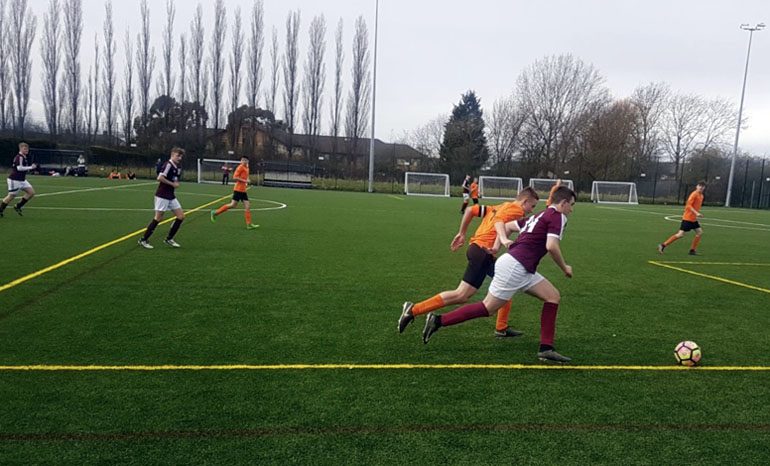 The recent snowy and wet weather has led to some of the Aycliffe Juniors teams needing to play a lot of catch up games in the next few weeks.

All they need now is a bit of a dry spell to get the grass pitches fit for action!

The Under 7’s travelled to face a very strong Stranton FC. A bright start didn’t stop Stranton scoring first but then a great ball from Trent was finished by Alex to equalise. It was Alex who went on to complete his hatrick, first with a great free kick and then getting his third after another good ball from Trent. Unfortunately Stranton were able to equalise after each of the Aycliffe goals and the game ended 3-3. In the development game there were two superb goals from Harry Dunn in a 5-2 defeat.

The Under 8’s had a challenging midweek game against a very talented Hartlepool team that ended in defeat. Next week they have two further games facing Seaton Carew and then Norton & Stockton.

The Under 9’s Russell Foster Spring League continued with the ‘Clarets’ beating Waldridge Park in midweek. They then played Blackhall Monks on Saturday, the game started evenly but Aycliffe then began to dominate. Goals from man of the match Joe (4), Jude (2) and one from Henry secured a 7-1 win.

The Under 9 ‘Whites’ also won their midweek game against Coxhoe and then played East Durham ‘Blues’ on Saturday. They were a little out of sorts and found themselves 2-0 down at half time. It was a much better second half and goals from Joshua C and Joel levelled the scores at 2-2. A tight finish saw Durham get the winner in a game that man of the match Flynn put in a sterling performance.

The Under 10’s ‘White’ made the trip to face Stockton Town ‘Yellow’. They were in good form and a Jayden hatrick was added to with goals from Oliver and man of the match Niall to give them a 5-2 win. In the development game it was Aidan who got a hatrick with man of the match Will also scoring in a 4-3 win.

The nine a side pitch at Sunnydale remains waterlogged so both the Under 11’s and Under 12 Russell Foster teams had their games postponed.

The Under 12’s TJFA League team went to Grangetown to play the first of five scheduled league games in a busy twelve day period. They lost to the same team two weeks ago but a much improved team effort and goals from Charlie (2), Lucas, Will, Kayne and Evan led them to a 6-2 win this time.

The Under 16’s played their League Challenge Cup semi final at Middleton Rangers. A spirited effort against higher league opposition was not enough and they lost out 3-0.

The Under 23’s League has now split in two to give teams the chance to complete their fixtures. The top half of the league, including Aycliffe, have formed the new Division 1. This week Aycliffe were due to travel to Chester le Street but the game couldn’t go ahead due to a waterlogged pitch.