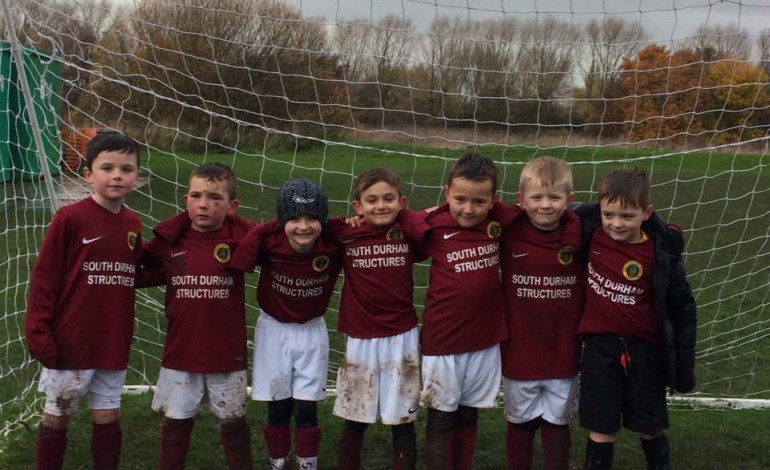 Aycliffe Juniors football teams had a mixed weekend with some cancellations of away games due to the inclement weather and others enjoying their home games at Sunnydale.

The Under 9 Russell Foster league team faced Spennymoor Castles, it was a keenly contested affair. Charlie scored for Aycliffe and Jack was named as man of the match in a 2-1 defeat. The Under 9 TJFA league team hosted Darlington All Stars on the 3G pitch at Sunnydale. They opened the scoring when Jayden finished from Niall’s deflected shot. Harvey scored the second and it was 2-0 at half time. In the second half two goals were conceded and the game ended 2-2. They won the second friendly game and the mornings men of the match were Harvey and Jack.

The Under 10’s played away at Leven on a very wet morning. Parker, Alfie, Lewis and Jake were linking up well early in the game. Lewis’ strike which hit the upright was the best chance of the first half. The second half was not the same and the Aycliffe team slipped to defeat.

Of the Under 11 teams the TJFA league game was cancelled on Sunday but the Russell Foster league team faced Humbledon Youth on Saturday. Noah had a superb game, scoring a fine solo goal and being named man of the match. Tom A scored from the penalty spot and Tom B made a good break and finished well for his goal. Despite a great effort and performance though Aycliffe suffered a 5-3 defeat.

The Under 12’s had a local derby at home against Shildon and started really well. Clark and Hillman got on the score sheet before Shildon scored a penalty to make it 2-1. At half time it was 5-1 after Clark completed a hatrick and Hume scored. The second half performance was just as good with Clark, Wilson and Talman scoring in an 8-2 win. Jacob Hume was the man of the match on a day when the full squad of 14 players were on top form.

The Under 15’s were also at home and faced Kader FC this was an exciting affair. A first half hatrick from Stoker put Aycliffe 3-2 up at the break. Two more goals from man of the match Stoker then opened up a 5-3 lead. Aycliffe though let their guard down and Kader came back to earn a 5-5 draw.

Neither the Under 17’s or Under 23’s fixtures survived the weather. We hope all teams get their games played next week.