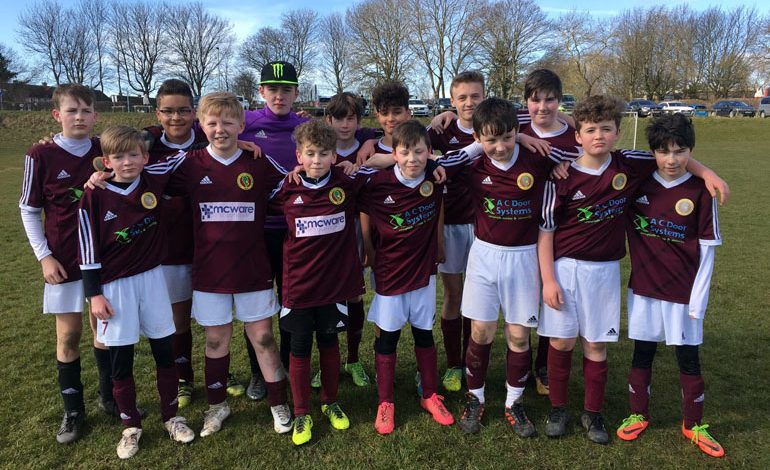 After the ‘Beast from the East’ wiped out last weekends fixtures it was good to see some of the Aycliffe Juniors teams back in action over the weekend. Some games were postponed which allowed players to enjoy Mother’s Day with their families.

The Under 8’s reversed their fixture to play Wynyard on Sunnydale’s 3G pitch. The visitors scored two first half goals before Oliver and Thomas netted to bring the score to 2-2. The Aycliffe team pushed for a winner but two late goals were conceded to give Wynyard a 4-2 win. Josh was the man of the match in this game. The development game gave the opportunity for new players to get some time on the pitch. Theo and Stephen made their debuts and the latter managed to score a good goal.

The Under 9’s have now entered two teams in the Russell Foster Spring League and they both started their campaigns on Saturday. The ‘Whites’ beat Washington with man of the match Kai getting a hatrick and Jude also scoring. The ‘Clarets’ played a strong Seaton Carew team. There were debuts in this game for Ido, Daniel, Sam, Flynn and Hudson. A goal from Daniel and a man of the match performance from Ido were not enough to avoid defeat.

The Under 10’s ‘Black’ hosted league leaders Stranton FC. They started positively creating a few chances then defended well to end the first half with the score 0-0. A good strike from range gave the visitors a lead and as Aycliffe pushed to equalise another goal was conceded. This match ended 2-0 with Jack named as the man of the match after another great game in goal. In the development game Caleb, Noah and man of the match Cole scored in a 3-3 draw.

The Under 11’s were away at Billingham Synthonia it was a tight start to the game on a heavy pitch. Thomas broke the deadlock when he scored from a tight angle but an equaliser was conceded shortly after. Jayden scored to regain the lead after he had an earlier effort ruled out by the referee. There were no further goals in the game and Aycliffe secured a good win, Ellis was named man of the match.

The Under 13’s played away at New Marske knowing a win would put them above their opponents in the league table. They started well when good build up from Kay and Watson gave Clark the chance to score and give Aycliffe the lead. That lead was doubled when Kay scored with a great free kick. A couple of defensive errors allowed Marske to level the score before man of the match Watson made a great break and scored to make the final score 3-2.

The Under 16’s hosted table topping Darlington 21st All Stars. They performed well in the first half and Stoker got a goal making the score 2-1 at the break. The visitors’ strength shone through after the break as the Darlington team ran out 7-1 winners.

The Under 23’s travelled to play Peterlee Helford United. Jack Slatcher scored a great long range goal and A Vincent was man of the match in a 1-1 draw.