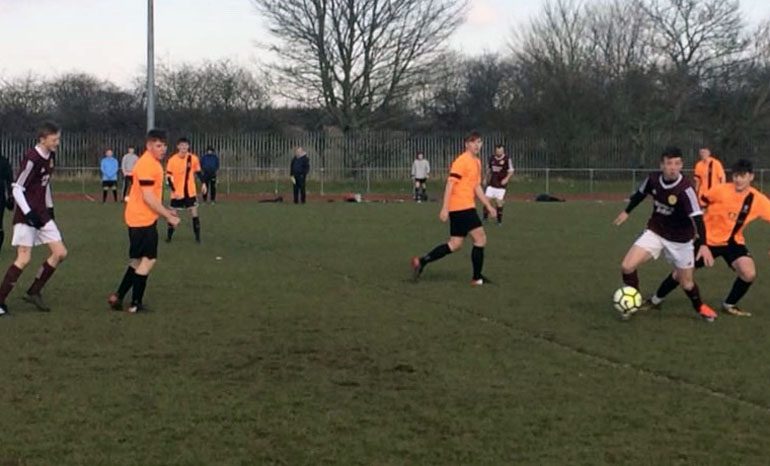 The Aycliffe Juniors football teams continued their seasons and looked to continue developing the younger teams and improving league positions for the older age groups.

The Under 6’s enjoyed a friendly with Darlington 21st All Stars. A great effort saw twelve goals scored from the team, Denver got four, there was a hatrick each for Jack and Daniel with Kai scoring two.

The Under 8’s travelled to play Stranton AFC, they went behind to an early goal but Oliver equalised. The first half though ended with Stranton 2-1 up. Another goal for Oliver and a second half hatrick from Thomas was added to by Dylan and this exciting game ended 6-4. Kenyon was named as the man of the match.

The Under 10’s ‘Black’ played Darlington Young Bulls away and started well with two goals from Jake opening up a 2-0 half time lead. In the second half, despite a man of the match performance from goal keeper Jack, they slipped to a 3-2 defeat. In the development game Alyssa had a great game in defence and Jayden scored in a 4-1 defeat.

The Under 10’s ‘White’ made the trip to Seaton Carew to play Golden Flatts. They came back happy after two goals each from Jayden and Archie secured a 4-1 win, the man of the match was Jack. In the second game Lucas and Oliver scored in a 2-0 win with Dom named as the man of the match.

The Under 11’s played away at Kader FC and they secured a great 5-0 win. McKenzie and Zak scored good first half goals then man of the match Thomas added two goals after the break with Jayden also getting on the score sheet.

The Under 12’s Russell Foster league team played high flying Durham County FC Whites for the second time in two weeks. They lost out 6-0 but showed great attitude and gave a positive performance.

The Under 12’s TJFA League side played at home against Boro Rangers ‘White’. The visitors scored first before Will equalised for Aycliffe. It was Will who scored again after the break to make it 2-1. The Aycliffe team dominated the rest of the game, there were no further goals but they thoroughly deserved this 2-1 win.

The Under 23’s played Pelton at Sunnydale, after an early penalty miss Matty Raisbeck opened the scoring with a neat finish. Pelton equalised before man of the match Jack Slatcher scored to make it 2-1. The last kick of the game saw the Pelton keeper smash a free kick in to the cross bar and Aycliffe held on to win the game.