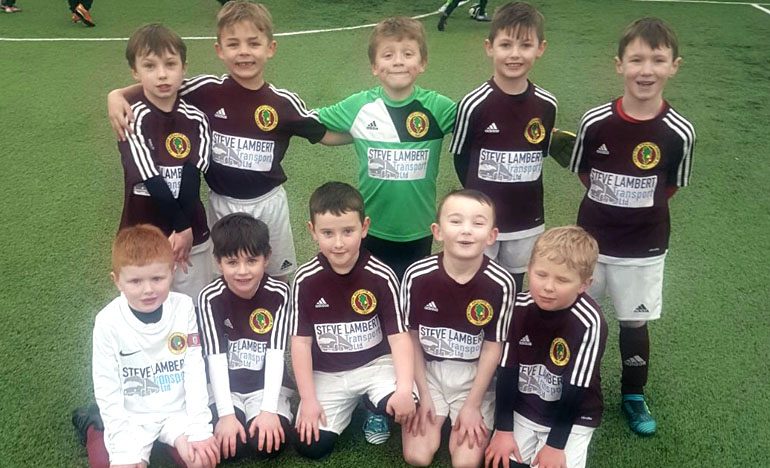 The Aycliffe Juniors season continued with another round of league and cup fixtures for the teams.

There were a couple of games postponed leaving both the Under 11’s and TJFA Under 12’s without a match.

The Under 7’s hosted Darlington Spraire Lads winning the league game 5-3 and the development game 4-2. In the league game a hatrick from Evan and a goal from Alex led to a 4-1 half time lead before David added the fifth goal in the second half.

The Under 8’s continued their Challenge Cup campaign playing a third round game against Trimdon at Sunnydale. They progressed to the next round with a 5-1 win, Dylan grabbed a hatrick and man of the match Kenyon scored twice. The second game ended with an 8-2 win, Thomas scoring a fantastic five goals with Josh (2) and Dylan also on target.

The Under 10’s ‘Black’ played at home against Greatham FC ‘White’ and it was goalless at the break. In the second half two Jake Smith goals either side of one from Jade Ferry opened up a three goal lead. Noah also went on to score in this 4-2 win with Emrehan named as man of the match. The second game ended 7-0 to Aycliffe with man of the match Joseph getting a hatrick and Jake (2), Jayden and Cole also scoring.

The Under 10’s ‘White’ hosted Stockton Town ‘Yellow’ and secured a good win. Man of the match Niall scored a hatrick, Oliver bagged a brace and Harvey scored in a 6-3 league win. The second game also ended with an Aycliffe win and in this one man of the match Dominic, Oliver and Will all scored.

The Under 12’s Russell Foster League team played away at Durham County FC ‘Whites’. They travelled with only the required nine players to play in wintry conditions. A determined effort was not enough to stop the league’s second placed team winning 5-0.

The Under 13’s played at Sunnydale in a local derby against Shildon and a fine performance provided a 6-2 win.

The Under 16’s made the trip to face high flying Richmond Town and a fantastic effort led to a 5-1 win.