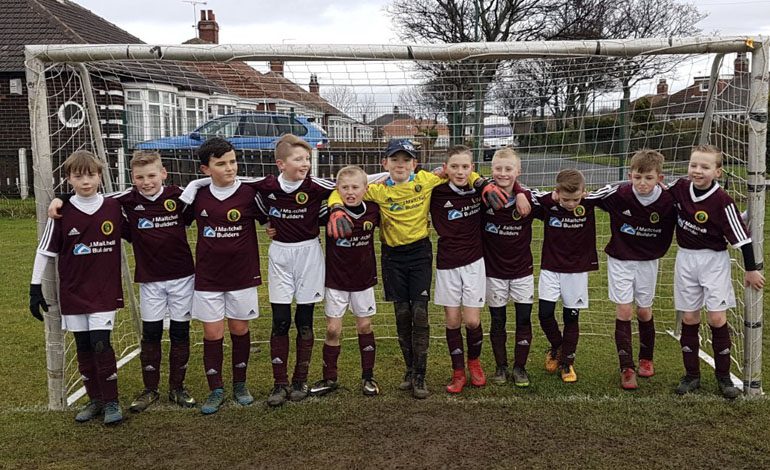 There were some exciting fixtures this weekend for the Aycliffe Juniors. Three teams were involved in cup quarter finals whilst others enjoyed earlier rounds of the cup or league games.

The Under 7’s played a friendly at Seaton Carew Tigers. They all enjoyed a few mini games having great fun and there was some excellent football played.

The Under 8’s were in Challenge Cup Second Round action at Guisborough Town ‘Whites’ and they won the game 8-1. Oliver scored a hatrick, Kenyon scored twice and there was a goal each for Dylan, Thomas and man of the match Finley.

The Under 9’s played at Billingham Juniors and returned home pleased with a 1-0 win.

The Under 10’s ‘White’ travelled to Redcar Town ‘Whites’ for their Challenge Cup Quarter Final and they got through to the semi final with a 4-1 win.

The Under 11’s visited Hemlington United and put in a great performance to draw 0-0 against top of the table opposition.

The Under 12’s Russell Foster League team reversed their fixture and played away at Swalwell Swifts. The poor state of the nine a side pitch at Sunnydale led to home advantage being conceded but a great performance saw them win 1-0 away from home. Man of the match Charlie played the through ball for Noah to score the winning goal.

The Under 12’s TJFA League team made the trip to play Marton FC ‘Royals’ in their League Cup Quarter Final. The lads did not have their best day at the office and despite dominating the first half they couldn’t score. After a deflected shot put Marton in the lead they did well to defend and hold on for a 1-0 win.

The Under 16’s were due to play Cleveland Juniors from the league above in their Challenge Cup Quarter Final. The opposition though suffered with players dropping out so forfeited the fixture and this placed Aycliffe in to the semi final draw.

The Under 23’s had a mid table clash against Sunderland University first team at Sunnydale. This was a match they went on to win 3-0.