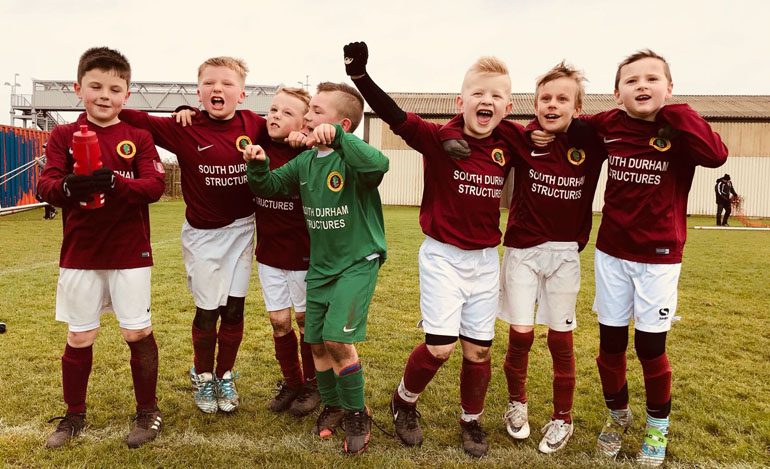 After the heavy snowfall led to no outdoor games last weekend it was good to see the Aycliffe Juniors teams back in action at the weekend.

The Under 7’s played at Sunnydale against Leven and put in a great performance against a strong team. Leven started well and scored three quick goals before Logan pulled one back. Leven’s fourth goal was immediately replied to with a neat finish from Sam to make it 4-2. This exciting first half ended with the score at 6-4 after Alex chipped in and Harry scored. Alex’s second goal came after the break and the match ended 7-5 to Leven.

The Under 8’s travelled to Norton and Stockton Ancients ‘Amber’ and came away 5-3 winners. Man of the match Thomas scored the first three goals to get his hatrick. Kenyon and Dylan then completed the Aycliffe scoring. The second game was played as seven a side instead of the normal five and Zeke, Dylan and Finley scored in a 5-3 defeat.

The Under 9’s hosted Stranton AFC who had won the reverse fixture 7-1 earlier in the season. Aycliffe’s improvement was evident from the start as they went ahead through Kai’s goal. A great second half goal from Jayden didn’t prove enough as Stranton came back and won the match 3-2. Man of the match in the first game was Harry with Max winning that award in the second game for his part in a fine team performance.

The Under 10’s ‘Black’ played at home against Eaglescliffe Elementis, after going behind 1-0 Jake Smith scored from the penalty spot to equalise. Jade Ferry then added the second Aycliffe goal and Jake Smith completed the scoring in this great 3-1 win. Jack Lowis was named as man of the match for a great game in the Aycliffe goal. The development game was played as nine a side and man of the match Jake scored four goals with Jayden also on target in a 7-5 loss.

The Under 11’s were away at Saxon Juniors and were sporting a new away kit kindly sponsored by SE Landscaping, many thanks to them for their support. On the pitch Charlie opened the scoring before Thomas doubled the lead from a Jake corner. Zac scored twice in the second half to secure a 4-2 win with the whole team named as men of the match for their great attitude.

The Under 12’s TJFA League team visited Boro Rangers ‘Blue’ they went a goal down but Charlie D’s penalty made it 1-1 at half time. Six second half goals scored by Kayne (3), Jake P, Charlie B and Lucas secured a 7-2 win.

The Under 13’s were at Sunnydale playing Greatham FC but illness and injury reduced them to only 10 men. They managed to hold their visitors to a 1-0 lead for most of the game but in the last fifteen minutes they tired and more goals were conceded with the game ending in a 7-0 loss. Great commitment was shown from the ten available players.

The Under 16’s were also at home facing bottom of the league Leven AFC. It was a frustrating game and goals from Boddy (2) and Pattison were needed to bring Aycliffe level on three occasions making the score 3-3 in the dying minutes. However the visitors scored in the last minute to win 4-3.

The Under 23’s travelled to high flying Whinney Banks and a fiery game ended 4-3 to the home team.