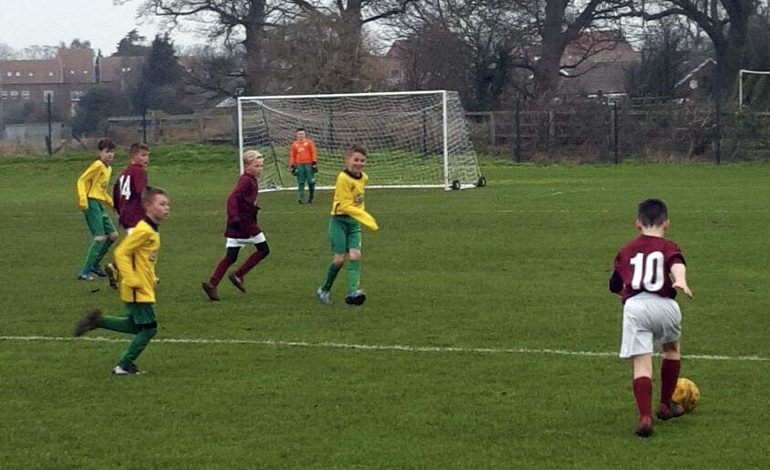 There was a busier schedule of fixtures for the Aycliffe Juniors teams this week as the players were getting back in to match action following postponements and holidays.

The Under 7’s travelled to Hartlepool Pools Youth and played two games, losing one and drawing the other. On the score sheet were Alex with a hatrick, Evan with two then David and Sam getting one goal each.

The Under 8’s made the trip to play Darlington FC Quakers. They played some great football in the first half but fell away in the second half and lost the game. Thomas set up Oliver to open the scoring but the Quakers equalised to make it 1-1 at half time. After going 3-1 down it was Finley’s precise through ball that set up Thomas to score again. The home teams strength then showed as they went on to win the game in which Dylan was the Aycliffe man of the match.

The Under 9’s played Primrose Hill at Sunnydale, in their first game they lost 3-0 after being unable to convert the chances they created. In the second match they turned things round to win 2-1.

The Under 10’s ‘Black’ were at home playing Billingham Juniors Lions and won both of their games, first 5-1 and then 5-4.

The Under 10’s ‘White’ played away at the previously unbeaten Seaton Carew Lions. They put in a great performance to win 2-1. The goals came from Niall and Jayden with Harvey named as man of the match. The second game also ended with an Aycliffe win. Oliver and man of the match Aidan got the goals in this game.

The Under 11’s faced Bedale, they switched the game to play away in order to ensure it went ahead. The team then travelled with only one sub and put in a great effort as two injuries saw them finish the game without a full team. The battling effort was though in vain as they lost out 3-2. Charlie Brown opened the scoring but Bedale then got in to a 3-1 lead. The injuries then came but rather than sit back the lads pushed forward and Mackenzie netted his first goal for the club tofinish the scoring.

The Under 12’s Russell Foster League team played South Shields ‘Roma’. A strong first half performance made the score 1-1 at the break. However Shields got on top in the second half and came away 6-1 winners.

The Under 12’s TJFA League team travelled to play Middleton Rangers and ended the game as 10-1 winners. There was only a Charlie B goal in the first half but he then doubled his tally with another after the break. Further second half goals came from a Will hatrick, Evan’s brace and one each for Kayne, Jake M and Dom in a comprehensive win.

The Under 13’s got back in to action at high flying Hartlepool Pools Youth. They found themselves 2-0 down, then Cooper’s fantastic shot hit the net to make it 2-1 at half time. Hardy’s well hit volley pulled Aycliffe level but it was Pools who again took the lead at 3-2. In the last minute Cayless scored from a corner and sealed a superb draw for Aycliffe. Goalkeeper Hitch was named as man of the match for a fantastic effort between the posts.

The Under 16’s were due to host Goldsbrough United but the match was called off at short notice with the opposition unable to field a side.

The Under 23’s travelled to face Gateshead Redheugh and came away with a point after a 1-1 draw.