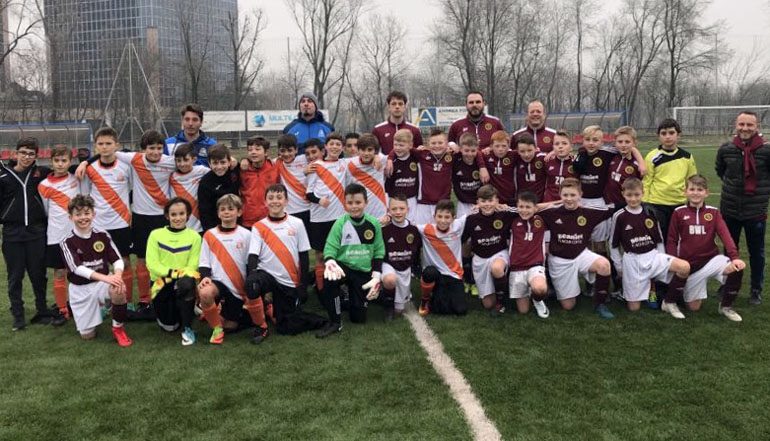 After December saw only a handful of games played involving our teams, it was great that some of the Aycliffe Juniors returned to action on the first weekend of 2018.

There was a variety of fixtures this week including a superb trip to Milan for one of the teams.

The Under 12’s planned a trip to Italy to bring in the new year and a fantastic weekend away included a friendly against the local team, SSD Franco Scarioni 1925. The hosts are a development side for Serie A’s Atalanta so were sure to be tough opponents. It would be fair to say the Aycliffe lads had enjoyed their trip and rest before the game was not a priority! However they all put in a great performance and after Charlie B beat his man and chipped a cross Alex headed in to open the Aycliffe account. Tom stepped up to score from the penalty spot in an entertaining game which crowned an excellent experience for all involved.

The Under 10’s ‘White’ hosted Stockton Town ‘Blue’ and played well to secure a 4-1 win. Jayden (2), Niall and Oliver scored the goals and Harvey was named as the man of the match.

The Under 11’s squad were all proud that their goal keeper, Noah, was selected to play for Darlington and District Schools on Saturday. Then on Sunday they had a Challenge Cup game and travelled to play Division 2 Skelton. It was a tough challenge against higher league opponents and the lads lost out despite a goal from Thomas.