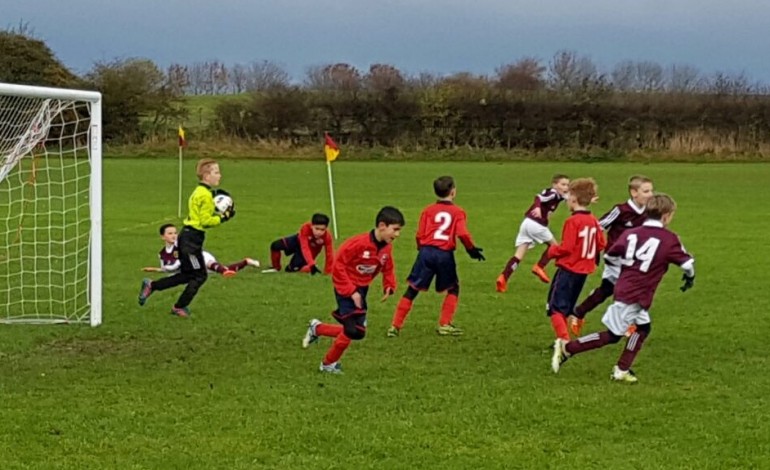 It was a wet weekend of action for Aycliffe Juniors with one game later on Sunday not beating the weather but the rest going ahead.

The Under 9 Russell Foster league team started their winter league playing Dalton Park Rangers. Kenzie got the first two goals before Charlie finished the third well. After Dalton scored one in reply Kenzie completed his hatrick and then also got his fourth and the sides fifth before half time. There were no more goals for Aycliffe in the second half and the match ended 5-3 with Kenzie named as the man of the match.

The Under 9 TJFA league team were in the second round of the challenge cup and played Redcar Athletic. They battled to get on top then scored through Niall’s shot this was the first of four first half goals for him with Dom and Jayden also on target so it was 6-0 at half time. Jayden then added a brilliant goal before Rhys’ hatrick made it 10-0, a second goal for Dom went in as did one at the other end and the game ended 11-1. The second friendly game saw Aycliffe get another win, the mornings men of the match were Jayden and Aidan.

The Under 11 Russell Foster league team played away at Seaham in some very windy conditions. Aycliffe’s possession was not rewarded early in the game and some direct play from the hosts caught Aycliffe out. After the first goal was conceded confidence dropped and the score was 5-0 by half time. The second half performance was much better with Reuben, Noah and Sam all having shots saved. Isaac and Tom A played well in midfield but the score remained the same. Alex was named as man of the match for yet another good game at left back.

The Under 11 TJFA league side played in the third round of the cup and were too strong for Kader FC. They did go a goal behind before Charlie and Lucas scored two each to open up a 4-1 half time lead. It was the same two players creating chances for each other and scoring in the second half with Charlie ending the game scoring five goals, Lucas completing his hatrick and then Jacob chipped in with the last goal in a 9-2 win.

The Under 12’s travelled to play Dormanstown, in the first half two goals were given away with a couple of mistakes. A penalty from Hillman got Aycliffe back in the game and they then pushed for the equaliser. There was some good pressure and chances but the game went away from the visitors and this one ended in a 4-1 defeat.

The Under 15’s faced Whinney Banks in the fourth round of the league cup. The opposition are currently the top team in Division One. Brilliant defending in the first half kept the game at 0-0, the hosts added two goals after half time before Stoker scored to keep Aycliffe in the game at 2-1. This fantastic effort and work rate though took it out of the Aycliffe side. They did a superb job limiting a very good side as they slipped to defeat but should be very proud of their efforts.

By the time of the Under 17’s game on Sunday afternoon the rain had left standing water on their pitch so they were not able to play. The Under 23’s did face Consett and were in a confident mood after three successive wins. A Jack Slatcher free kick was finished by Fitzgerald and Aycliffe were one up after only five minutes. At half time the score had moved to 3-0 with goals from Raisbeck and Howe. Further scores from Slatcher, Scott and Bowes moved the score along to 6-2 and earned a solid win. It was pleasing for Aycliffe to field two young new signings in George Slatcher and Harris as the game came to its close. The games man of the match was Michael Howe who had an excellent all round performance.