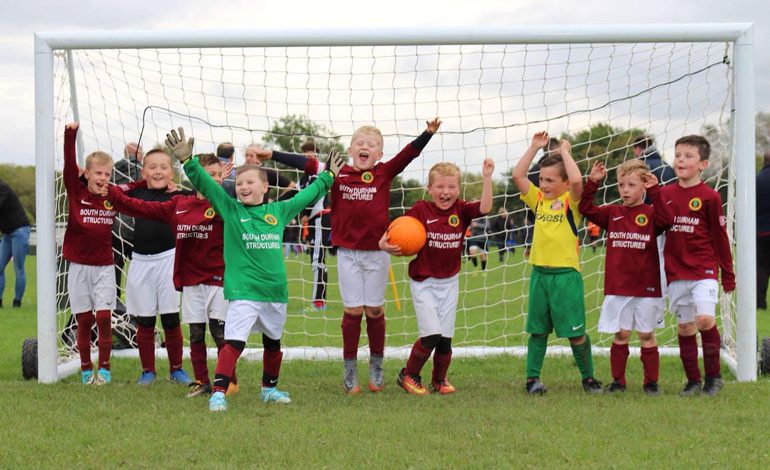 Aycliffe Juniors enjoyed a superb community day alongside Newton Aycliffe FC on Saturday before getting back to their usual weekly games.

The community day saw both NAJFC and NAFC coaches run short skills sessions for those attending. There was a great turn out, as pictured, and many new players enjoyed their first taste of football. It was fantastic to have the support of NAFC for what was a very successful event.

The Under 7’s travelled to play Leven AFC but were beaten 6-2. They found themselves 3-0 down against a good passing team. Sam then scored direct from a corner and Alex also scored before the hosts finished the match well. All of the squad played well with a lot of effort put in by everyone.

The Under 8’s hosted Norton & Stockton Ancients ‘Amber’ and won the match 3-1. All nine players contributed well, Dylan did a great job up front, Alex and Thomas (2) scored the goals. Kenyon was named as the man of the match.

The Under 9’s played away against Stranton Juniors, Harry and Marley scored but the home team kept the pressure on and won the match. Henry was named as the man of the match.

The Under 10’s ‘Black’ travelled to play Eaglescliffe Elementis but ended up as the losing team. They put in a great effort and Jayden was the man of the match.

The Under 10’s ‘White’ hosted Billingham Synthonia and gained a superb 7-0 win. The Aycliffe side played some great football to beat a really strong team. Niall, Jayden and Connor scored two goals each with Jack also on the score sheet. Harvey was the man of the match.

The Under 11’s were away at Saxon Juniors and a great team effort secured a 5-1 win. Charlie opened the scoring before Saxon equalised, then Zak chipped the keeper to make it 2-1. Charlie added his second before Jake finished his own great run with a goal. The fifth and final goal was a great long range effort from Thomas.

The Under 12’s Russell Foster League team played away at league leaders Gateshead Redheugh. In the first half the Aycliffe team moved the ball well and Taylor hit the post. Man of the match Herbie made a penalty save but at the break they were 2-0 down. In the second half the unbeaten hosts extended their advantage to win 5-0.

The Under 12’s TJFA league team were invited to play at Newcastle United on Friday evening and their win was great preparation for the visit of Boro Rangers Blue. The Aycliffe team again performed well and won 2-0, both goals coming in the second half. Liam finished off Lucas’ cross and then Will scored after good work from Charlie.

The Under 13’s played away at Greatham and started really well with Clark’s goal making it 1-0. The quality continued but a second goal didn’t arrive and Greatham then improved and went in to win 4-1. Jake was given the man of the match award by the opposing manager.

The Under 16’s were away at Leven AFC and returned home 4-1 winners. Stoker and Hynes combined well to get the opening two goals with each player scoring from the others assist. Man of the match Burrows scored the next two goals with the first being a superb effort.

The Under 23’s were back in action and played against local rivals Ferryhill Town. The first half was distrusted with a 20 minute break to deal with an injury and it was good to hear Jack recovered well after the game. The second half saw two Andrew Vincent goals which secured a 2-1 win. Luke Allenby was the games man of the match.