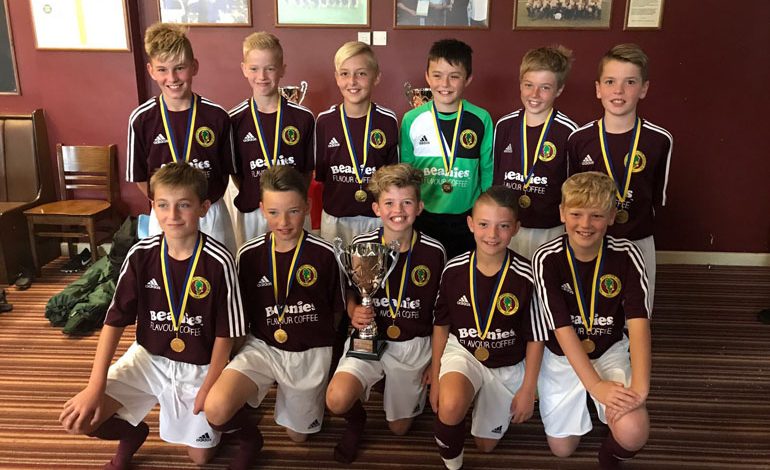 It was the final weekend of pre season preparations for the Aycliffe Juniors football teams. There were some friendlies played, the start of the Under 23’s cup and a great Under 12’s tournament win.

The Under 7’s will be waiting for a few weeks to start their league campaign so they took the chance to continue their development at the Bishop Auckland tournament. They competed well and did their coaches proud gaining one win from their games.

The Under 8’s played two friendly games against North Ormesby. They won 4-3 and then 5-1 with Alex scoring twice in the first game and netting a hatrick in the second. Other scorers on the day were Oliver, Thomas, Josh and Zeke.

The Under 9’s enjoyed friendly wins against Darlington based 21st All Stars, they came away with 3-2 then 4-3 wins. This was a great performance against a side from a higher league.

Both Under 12 teams travelled to the Stockton Town tournament. The Russell Foster league team finished their group games with a record of one win from four games. The TJFA league team were unbeaten in the group stage beating Stockton Town Blues 2-0, Whickham Fellside 3-1, Jarrow 4-0 and drawing 0-0 with Improtech.

In the semi final a superb Zack goal, direct from a corner, sealed a 1-0 win against Stockton Town Yellows. The final was a repeat of the group game against Improtech and this time Zack was on target again to ensure the tournament win. Over the course of the day the lads scored 11 goals and conceded only 1, Zack netted 6 times, Kayne scored 3 with Will and Liam getting one each.

The Under 23’s opened their season with a preliminary round Durham FA Sunday Cup game against Toft Hill Three Tuns. A few key players were missing and after going 2-0 and then 3-1 up they unfortunately lost 5-3. Burrows, Howe and Hansom were the scorers with Jack Slatcher named as the man of the match.