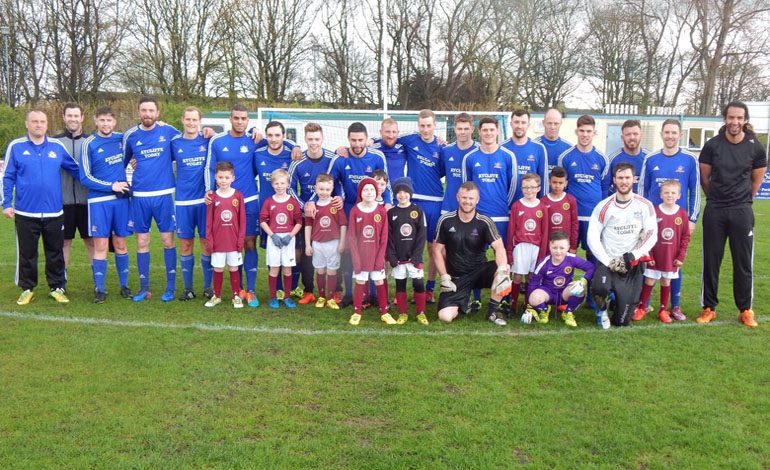 This weekend saw many of the Aycliffe Juniors conclude their league seasons with one team gaining a well deserved promotion. Our youngest teams who still have games remaining will continue to compete in the Russell Foster Spring league.

In the Spring league the Under 7’s played Coxhoe United and won 3-1 with man of the match Thomas scoring a hatrick. Josh made some great saves in goal and all the team played great passing football.

The Under 9’s Russell Foster league team played North East Sports and after going 2-0 down, goals from Jake and Jay brought the score level at 2-2. Despite a good effort they lost the game 5-2 with Jack named as the man of the match.

The Under 9’s TJFA team were playing their last league game against Mount Pleasant Rangers and won 4-1. Man of the match Niall and Jayden both scored two goals in the win. They have now finished their season as league runners up and in doing so have sealed promotion to Division 1. This is clearly a great achievement for the whole group of players who have performed superbly all season.

The Under 10’s have enjoyed a match day experience with Newton Aycliffe FC over the Easter weekend. Their final league game this weekend was away at Billingham United Hornets and they finished off in style with a 4-2 win. Zack scored twice, Alfie got one and Jake scored a great goal direct from a corner. The whole team were awarded the man of the match award after a great team effort in this game.

The Under 11 Russell Foster league team completed their league season away at Cleveland Hall. They came away second best on the day against the league runners up. The Aycliffe team finish the season in fifth place in a league they were promoted in to at the start of the season.

The Under 11 TJFA league team had a midweek match just before Easter at Darlington Spraire Lads and gained a comfortable 8-1 win. The goals came from a Jake P hatrick, Charlie (2), Zack (2) and Kieran’s first goal for the team. This weekend saw their final home league game against Whinney Banks, a repeat of their League Cup Semi Final and unfortunately the outcome was the same. With a second half goal from Lucas not enough as the Aycliffe team lost 4-1. This team’s season concludes with another midweek game, this time at Leven, and a win there will secure them fourth place in Division 1.

The Under 12’s will play their last league game against champions Saltburn Dolphins next week and they will finish the season in third place if defeat is avoided.

The Under 17’s have also had a great season and finish the league season as runners up. This week they were playing their last league match against Hardwick Youth and ran out 11-2 winners. The goals came with hatricks from Sam and Dan. Arran, Tom getting two each and Callum scoring a good long range goal.

The Under 23’s played their penultimate league game at Wolviston. After absorbing early pressure they scored two good goals through Raisbeck and Howe, the hosts pulled a goal back to make it 2-1 at half time. The second half was closely contested but no more goals were scored so the score remained 2-1. Craig Robertson was named as man of the match in this victory. The team complete their season at Chester le Street next week.

With most of our teams having now completed their fixtures we would like to thank all the players, coaches and volunteers involved with the club for their effort throughout the season. We all now look forward to Challenge Cup Finals for both the Under 9’s and Under 17’s on the 21st May.