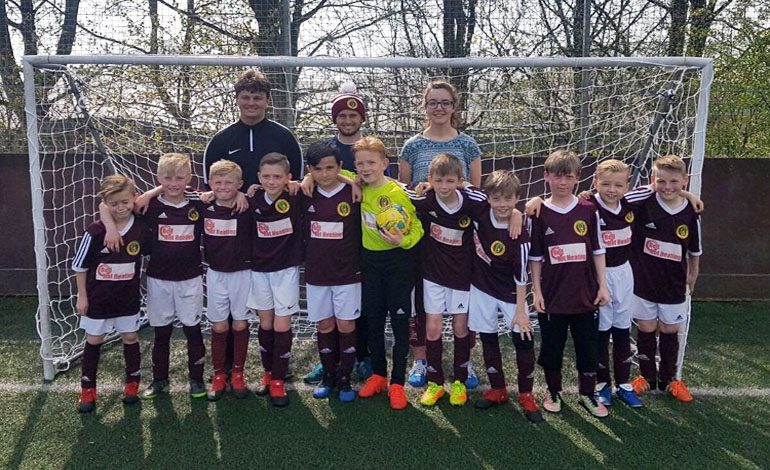 With some teams having now completed their league programmes there were fewer fixtures this week for the Aycliffe Juniors teams.

The undoubted highlight was the TJFA League Challenge Cup Semi Final for the Under 9’s against Nunthorpe Athletic.

The Aycliffe team had home advantage against strong opponents from North Riding Division One. The game was closely fought between two great teams and at the final whistle the score was 0-0. The game moved to extra time and the winning goal came from a superb Niall header to give the Aycliffe team a 1-0 win which progresses them in to the final.

The Under 7’s were in action against Chester Town Whites and they came away as 3-2 winners. Lewis, Dylan and man of the match Oliver were the scorers.

The Under 9’s Russell Foster league team played a high scoring derby game against Aycliffe Youth. This was an exciting match as the Juniors went 3-0 up then had to fight back from being 6-3 down and did make it 6-5. The final score though was 8-6 to the Youth Club team. The Juniors goals came from man of the match Noah scoring twice and Jake, Joseph, Jack and Charlie all getting one each.

The Under 11 TJFA league team had two games in the week. Firstly playing at Marton Blues on Tuesday. This was a great game between two strong teams. Evan put Aycliffe ahead then the hosts equalised before half time. In the second half it was a tight affair with both teams having chances. There was no further score and this game ended 1-1. On Sunday they faced Golden Flatts at Sunnydale and a tight first half ended 0-0. Second half goals came from Jake P, Zack and Charlie to secure a 3-0 win.

The Under 17’s are guaranteed a second place league finish and this week they played their penultimate league game away at Ferryhill Town. Only poor finishing stopped a really big win and goals from Kieran, Lewis B, Lewis R and a hatrick from Tom gave this team a 6-1 win.

The Under 23’s have three games remaining with all of these away from home. This week they travelled to play the University of Sunderland and dominated the game to win 3-0. Raisbeck scored the opening goal in the first five minutes and Slatcher scored twice in the second half to confirm the win. Matty Raisbeck was named as man of the match.