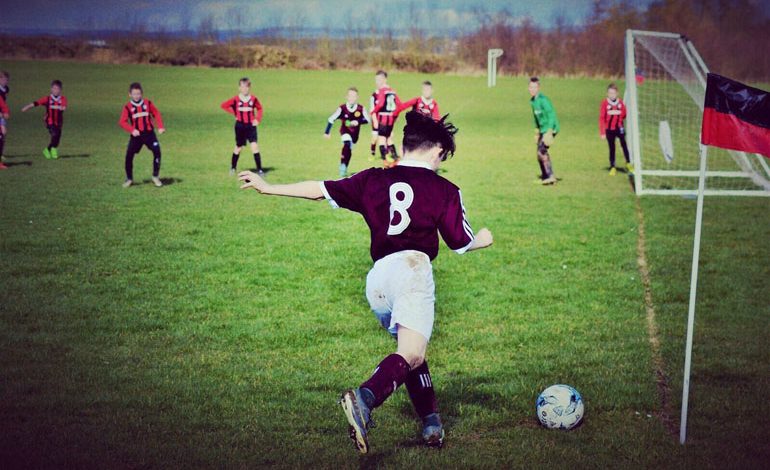 The Aycliffe Juniors took to the field to enjoy another weekend of footballing action.

The Under 7’s faced Silksworth Whites and played superbly to gain a 7-0 win. There were two goals each for Lewis, Dylan and man of the match Oli with Kenton also scoring one.

The Under 9’s Russell Foster League team were up against Hetton Lyons, amazingly Jack the goalkeeper scored twice in a 4-1 win. Kenzie and Jake also scored but the man of the match was Jack for his two goals.

The Under 9’s TJFA league side travelled to play Leven Athletic and after a top class performance they won 2-0. Connor and man of the match Jack were the goal scorers with both coming in the second half after the teams changed ends goalless. In the second game there was another closely fought win and Dan was the man of the match.

The Under 10’s were away at Trimdon United Juniors. Liam was the man of the match in a 3-0 loss.

The Under 11 Russell Foster League team were at home in the League Shield second round against Consett AFC Galaxy. The opposition, from a division above, were too strong and won the game 5-1. Aycliffe found themselves three goals down with Consett taking their chances well, before Noah got one back. The lads pushed hard to get back in to the game but tired with no subs available and the cup run came to an end. Herbie was named as man of the match and the team now look forward to finishing off their league campaign with three further games to play.

The Under 11 TJFA league team were looking to bounce back from last weeks defeat and were playing at home against North Ormesby. They put in a much more composed performance and first half goals from Zack and Lucas put them in to a 2-0 lead. In the second half after conceding one goal Jake P and Charlie scored with impressive long range strikes to make the final score 4-1.

The Under 12’s played at Sunnydale against struggling Normanby Black. Wilson finished off a Cayless corner then Clark scored a good goal to make it 2-0. Clark doubled his tally before the visitors got one back. R Hillman was the games man of the match in this 3-1 win as this team look to win their last two games to secure third place in the league.

The Under 17’s travelled to their leagues basement club, Hartlepool Pools Youth needing a point to secure runners up place in the league. The hosts though belittled their league position and opened up a 4-0 lead in twenty minutes. Goals from Tom and Lewis (2) made it a tense finish but the game ended in a 4-3 defeat for Aycliffe.

The Under 23’s were away at high flying Whinney Banks and a great performance was not enough to prevent a 1-0 loss. In this closely contested match Jack Slatcher was named as the man of the match.