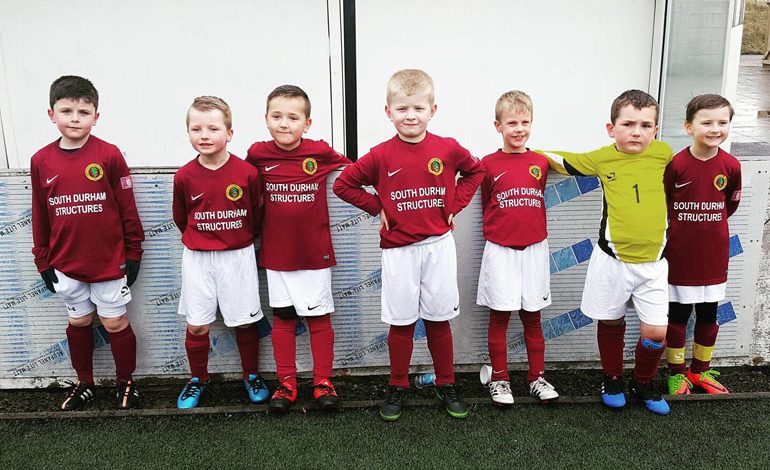 The Aycliffe Juniors were involved in another great weekend of football both at Sunnydale and across the region.

On Saturday it was our Russell Foster League teams in action. The Under 7’s continued their Spring Cup playing against North East Sport Spartans and won 3-0. They controlled the game from start to finish with lots of chances and fantastic goals scored by Dylan, Thomas and Lewis. Dylan was the games man of the match.

The Under 9’s were also in the Spring Cup and played Chester le Street Hoops. Jake scored an amazing 6 goals in this 8-1 win, with Jay and Kenzie also on target. Jack was named as the man of the match. All the lads and Layla had great games to keep their winning streak going.

The Under 11’s are concluding their league programme and looked to consolidate their mid table position playing against North East Sports Tigers. They came away with a 3-1 win after a strong performance. Noah opened the scoring and Anthony doubled the lead before half time. A goal was conceded but the team were spurred on by this and a headed goal by Charlie finished the scoring. Tom Aspinall was named as man of the match.

On Sunday it was the TJFA and Durham FA league teams taking to the pitch. The Under 9’s travelled to play top of the table Darlington Spraire Lads Eagles. They were outstanding from beginning to end and came up with a superb 4-0 win. Niall (2), Connor and Jack were the scorers and Harvey was the man of the match. In the second game Will scored four goals and was the man of the match in another good win.

The Under 10’s entertained Saxon Juniors and secured a 2-2 draw. The goals came from Zack and man of the match Charlie in a much improved team performance.

The Under 11’s played away at Middleton Rangers. The team looked deflated after the Semi Final loss last week and sunk to an uncharacteristic 6-2 loss. The goals were scored by Charlie and Lucas.

The Under 17’s also played Middleton Rangers who are potential League Challenge Cup Final opponents for this team. Lewis scored either side of half time to put them 2-0 up. Kieran scored a good goal beating three men on his way then Arran, Sam and Tom added goals in a 6-0 win. This win was even more impressive given that due to injuries and work commitments Aycliffe played with only 10 men.

The Under 23’s made the short trip to face neighbours Shildon. The first half was fiercely contested and Shildon got the opening goal from a corner after forty minutes. It remained a tight game with few chances, the opportunity to equalise came with five minutes left but after a good move the shot from Raisbeck was agonisingly wide. The game ended 1-0 to Shildon with Andrew Vincent named as the man of the match.