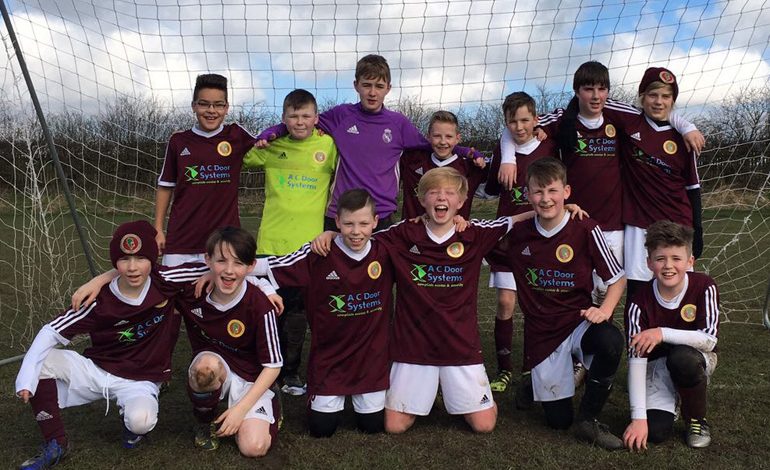 The Aycliffe Juniors league schedules continued and there was another semi final to enjoy this week with manager Adrian Dawson looking for a double.

After he guided the Under 17’s to a final last week it was his Under 11’s team facing Whinney Banks in the Under 11 TJFA League Cup semi this week.

Whinney Banks and Aycliffe have both been competing at the top of Division 1 this year so it was bound to be a tough and well contested match. The Aycliffe team though were out fought in a 5-0 loss. It was a day when the Aycliffe chances were not finished and the strong visitors took their opportunities and deservedly won the game to progress to the final.

The Under 7’s continued their Russell Foster League Spring Cup playing Hetton Lyons. They were involved in another high scoring draw and were left disappointed to end the game 3-3 when they were 3-0 ahead. Man of the match Thomas scored twice and Jamie got the other goal as the Aycliffe team started really well. The chances kept coming but unfortunately goals were conceded at the other end and the game ended in a draw.

The Under 8 and Under 9’s squads enjoyed a training session with Newton Aycliffe FC senior team on Thursday so they were all well prepared for the weekends games. The hard work in training paid off with each team coming up with a win.

The Under 8’s went on to complete their league season with a 4-2 win against Darlington RA. They are likely to finish the league in third place so well done to all the players for a great league campaign.

The Under 9 Russell Foster league team started their Spring Cup season with a 3-0 win against Birtley Town. Man of the match Jake Smith completed a hatrick in this great team performance as they dominated the game from beginning to end.

The Under 9 TJFA league team were at home to Bishop Auckland St Mary’s and they secured an impressive 10-0 win. Jack got a hatrick, Harvey and Jayden scored a brace each, with Will, Dom and Connor getting a goal a piece. Harvey was named as the man of the match in this game with Will taking that accolade in the second game, which was also a convincing win.

The Under 10’s travelled to play Billingham United Wasps but lost out 4-1. The Under 11 Russell Foster league team played their League Shield first round game against Shotton which had been cancelled the week before. They put in a great performance against a team from the league above to progress to the next round with a 9-1 win. Every player was named as man of the match in a great team display. The goals came from Charlie (4) and one each for Jake, Taylor, Anthony and Noah with an own goal also going in Aycliffe’s favour.

The Under 12’s made the short trip to Heighington and man of the match Charlie Cayless scored in a 4-0 win.

The Under 17’s were back in league action at home against Billingham Juniors. Arran scored from a corner and Kieran from the penalty spot as Aycliffe gained a 2-0 lead. Both Lewis Race and Lewis Bunting then scored and the half time score was 4-2. The visitors made it 4-4 before both Lewis’ and Sam scored in an exciting 8-5 win.