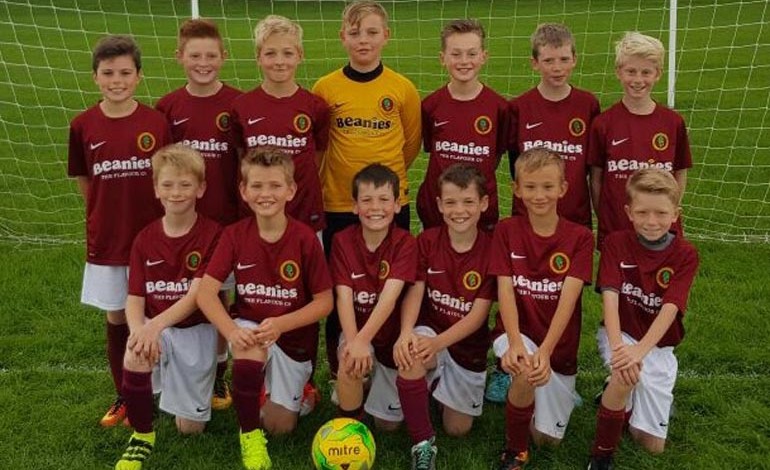 Aycliffe Juniors carried on their footballing exploits and adventures over the weekend with lots of action to enjoy.

The Under 7’s continued their amazing start to league football with a superb 9-2 win. The Under 8’s have had great success in their opening eight league games and have amassed a fantastic 38 goals in an unbeaten run including six wins and two draws. They have played some really good opposition and shown both quality and perseverance to overcome them and sustain this great run of form.

The Under 9’s Russell Foster League side faced Newton Aycliffe Youth this weekend. They started brightly with McKenzie shooting just wide. Charlie then won the ball for Jake to go on a great run and score the first goal, 1-0 to the Juniors. The equaliser came despite some great defending from Robbie, Charlie and Lucas. With only three minutes left the game was still level. Some great play led to a goal for Lucas with Charlie getting two more in a 4-1 win. The Juniors man of the match was Jake Smith.

The Under 9’s TJFA league side were in top form to win 12-0. Lucas in goal was great when needed with Connor, James, Aidan and Jacob solid at the back. Goals came from debutant Dom getting 5, Jayden scoring 4, Niall got 2 and Rhys added another. The second game was also a convincing win and the mornings men of the match were Jayden and Jacob.

The Under 11 Russell Foster League team (pictured) were at home against HFC United Hoops. They were dominant in the first half with attacks built from the back and these forced saves from the visiting keeper, as well as a shot from Tom hitting the post. Half time though came with a 1-0 deficit as HFC scored on the break. The second half was much the same and a lot of Aycliffe pressure was met by good defending and HFC again scored on the break to win the game 2-0. The mornings man of the match was Alex.

The Under 11 TJFA side put in a great effort against a strong Seaton Carew team. Superb goals in each half from Charlie, both strikes from outside the box, secured a 2-0 win. The defensive effort was superb with Harry, Jake and Aaron first to everything and winning the challenges to allow the attacking players to get on the front foot. Each of Evan, Lucas, Jacob and Zack made good ground and created chances during the match.

The Under 12’s maintained their 100% league record with an excellent 6-4 win away at Greatham.

The Under 13’s had a home game against Saxon Juniors, Aycliffe had more chances early on with Saxon looking good on the break. The visitors opened up a good lead and Zack’s goal clawed one back to make it 4-1 at half time. A good team talk saw the lads start the second half positively with Olly and Adam scoring to get Aycliffe back in the game. This spirited display saw Owen also score but the match ended 7-4 to Saxon. The home teams man of the match was Zack who was both influential and hard working in midfield.

The Under 15’s continued their great start to the season with a 6-5 win away against Great Ayton.

The Under 17’s last outing was an away match at Billingham Juniors, injuries led to only 13 players being available. Arron, Nathan and Jamie scored to put them 3-0 up. Billingham got one back to make it 3-1 at the break. Goals kept being exchanged as the score moved to 6-4 before Harrison marked a fine debut with the final goal in a 7-4 win.

The Under 23’s had a tough assignment as they visited league leaders Guisbirough Town, who have not lost at home for four years. They put in a great display, hit the bar twice but could not avoid a 4-0 defeat.