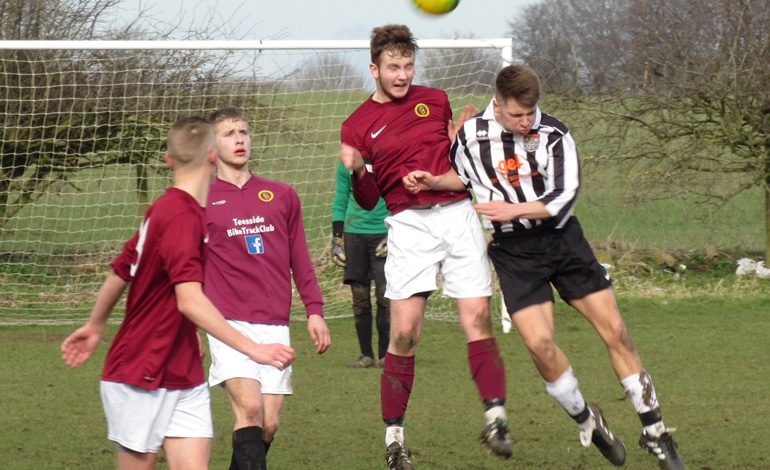 Aycliffe Juniors enjoyed another weekend of footballing action as most teams tried to continue league games. The highlight though was a much anticipated cup semi final for the Under 17’s.

Seaton Carew were the visiting semi final opponents, a team who play a league above the Aycliffe side. League standings though were over turned as the home team won 4-1 and booked a place in the final.

The first half was a tight affair with neither keeper really tested and it was goalless at the break. A few changes were made at half time and Kieran pressured the visiting keeper to get the opening goal. The lead was doubled when Lewis finished a great through ball to make the score 2-0 to Aycliffe. Seaton got one back, then Arran came on up front to cause the defence all sorts of trouble and earn a penalty. Kieran scored from the spot and then Callum finished the game off with the fourth goal. A great effort was put in throughout the game from all of the 15 man squad and they will now look forward to the final.

The Under 7’s started their Russell Foster Spring Cup which will be undertaken over the next 11 weeks. Aycliffe faced a strong Houghton Albion team this week and there were lots of chances on goal. Albion took the lead before Thomas equalised but at half time Albion were 2-1 up. Thomas’ second brought the game level before the Aycliffe team found themselves 4-2 behind. Dylan played in Oli to get one goal back. Lewis went close and then it was Zeke who played in Thomas to complete his hatrick and make the final score 4-4. This really was a great game and Josh was named as man of the match for making some fantastic saves in goal.

The Under 9’s TJFA league team played Norton & Stockton Ancients at Sunnydale and produced a terrific 9-0 win. There was some great football on display and the goals came from Niall (4), Jayden (3) and Will (2). The second game saw another big win with Harvey and Connor named as the mornings men of the match.

The Under 10’s were all set to travel to play Seaton Carew Lions, however an hour before kick off the game was postponed. The Under 11 Russell Foster league team were due to be at home in the first round of the League Shield against Shotton. A waterlogged pitch stopped this game going ahead. The Under 11 TJFA league team’s game was cancelled due to a flooded pitch at Leven.

The Under 12’s played host to their mid table and local rivals Sedgefield Youth, a great display gained a well deserved 2-1 win. The Under 15’s were also scheduled to be at home against Hartlepool Pools Youth however this game was not played due to the standing water on that pitch.

The Under 23’s played away to struggling Washington United but had a tough game against physical opponents. Aycliffe dominated possession and had more chances on goal but were denied many times by the home keeper. Raisbeck scored and Slatcher was named as man of the match in a 4-1 defeat.